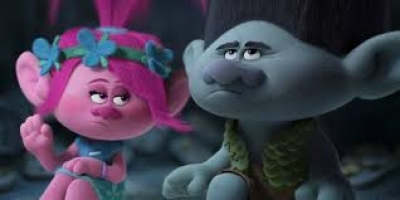 Review written by Jon patch with 3.5 out of 4 paws

Hug, dance and sing are a lot of what the Trolls do every day. Well, except for Branch (voice of Justin Timberlake) who happens to think the unhappy Bergen’s from Bergen Town will find them. You see the Trolls were kept in the center of Bergen Town in a tree surrounded by fence and every time a Bergen wanted to be happy they would be able to eat a Troll during Trollstous. It happens to be a big celebration this time since King Gristle (voice of Christopher Mintz-Please) will get to eat his first Troll and take over the reign of king from his father King Gristle Sr. (voice of John Cleese). When they discover the Trolls are missing they blame the Chef (voice of Christine Baranski) for the disappearance of the Trolls. Banished from Bergen Town the Chef has one goal and that is to find where the Trolls have gone.

Meanwhile some time later at an undisclosed area in the forest Princess Poppy (voice of Anna Kendrick) is throwing a party and not just an ordinary party but a very loud party and of course Branch does not think it’s a good idea. It turns out it is not a good idea after all since the Chef originally from Bergen Town discovers their whereabouts. This leads to the capture of several Trolls including Poppy’s good friend Creek (voice of Russell Brand) and Biggie (voice of James Corden) along with others. Blaming herself for the capture of her friends Poppy sets off to Bergen Town to save them with Branch not far behind to keep an eye on her.

In turns out that the Chef along with her assistant Bridget (voice of Zooey Deschanel) has the Trolls and is getting them ready for a dinner celebration. Poppy though discovers a window of opportunity when she finds out that Bridget has a crush on King Gristle Jr. After a bargain and a bit of a Cinderella story later Poppy, Branch with the help of Bridget is out to save the day. What the Bergen’s thereafter discover is something they never would have assumed could ever be possible and with the help of the Trolls except for one imposter, life for the Trolls and the Bergen’s will never be the same again. Happiness is in a lot of us but sometimes you need someone to help you find it. In the end you can’t stop the feeling and remember to stay through the credits to see the final ending.

I must say I absolutely loved this film which contained a lot of happiness all delivered in a very cute little package. Great animation, superb choices of voice talent and a well written and directed story lead to a must see film for the entire family. Unlike some other animated films this one does not have the array of adult fare but it is absolutely adorable and so well developed that parents will enjoy seeing it with their kids. It is the older single adults or the ones on a date that may miss seeing some of the adult content laced within the story line. Other than that the music is awesome, the colors of the animation vibrant and the feeling of happy left on your face that makes this film all worth seeing.

More in this category: « Inferno Hacksaw Ridge »
back to top

We have 252 guests and no members online