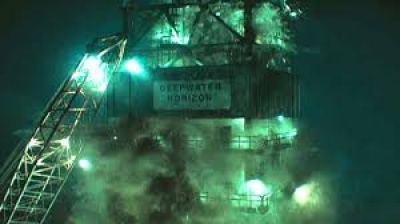 Mike Williams (Mark Wahlberg) is a family man living a middle class life with his wife Felicia (Kate Hudson) and their young daughter Sydney (Stella Allen). He works on an oil rig known by many to be the safest rig in the gulf. He is saying goodbye to his family since he will be out to sea for 21 days and nights with skype as his contact to stay in touch. He and other members of his crew fly out via helicopter to the Deepwater Horizon located 41 miles southeast of Louisiana. Thanks to the design efforts of Andrea Fleytas (Gina Rodriguez) from Transocean the rig is a free floater and controlled by underwater propellers to keep it in place rather than being suspended to the ocean floor.

Currently on the Deep water Horizon there are a number of BP executives (John Malkovich) making decisions about the money situation and ways to cut costs but Mr. Jimmy (Kurt Russell) won’t hear anything about cutting costs when it comes to his men’s safety so they end up running a negative pressure test. First test on the drill pipe and second test to be safe on the kill line both currently showing no mud displacement, at first.

After one hour into this story which sets up a lot about the characters, the running of an oil rig and the technical issues involved then all hell breaks loose making the Deepwater Horizon the true well from hell. The gas alarms are going off, the oil rig is moving, they cannot not shut off any of the valves, mass explosions, fires, the rig is engulfed in flames and many of the people are trapped, injured and trying to make their way to life boats with some jumping to the water below. The coast guard is 25 minutes away but thankfully there is a small ship stationed nearby which is able to help many of the men and woman. In the end many of the men bow their heads in prayer being thankful for their saved lives and to pray for the ones lost on this horrific day, April 20, 2010, when 11 men lost their lives. This disaster lasted 87 days and 210 million gallons of oil spilled into the gulf killing plants, birds and many other creatures in the waters while affecting the businesses to the Gulf States as well.

The first hour of the story as I said is a bit slow moving but the director and writers do a nice job of filling the audience in on the procedures of running an oil rig such as the Deepwater Horizon. On an entertainment level this first hour moves a bit slow but as soon as the rig begins to have issues the tension in the theater can be cut with a knife. Special effects, the score and the action from this point on is intense and knowing that it’s based on a true story only makes the destruction of this rig even more traumatic. I especially appreciated that at the end of the film they show honor to the 11 men that have lost their lives yet I was surprised people were leaving during these credits rather than sitting to honor the lives of these men as well. We all know that BP paid a price but not as much as the men and women, families and friends did as reflected in the final minutes of the film. I must add that the camera shot of the America flag wavering over the flames of the sinking rig was a memorable touch.

There are a number of actors in this story that are not mentioned in my review but are all considered brilliant in their roles. As for the main characters Wahlberg is the true hero and wears it well in his role. Hudson is not a major character but does well bringing out emotions for her husband in the story, Wahlberg. Russell is spectacular and Rodriguez was a good casting call as was Malkovich. Overall a film worth seeing on the big screen but in the end make sure you have a box of tissues. As for the animals in this film they had one bird strike and a trapped Pelican that goes a bit crazy and loses its life. With no special thanks to BP of course and their bad decisions many species of sea life also died on this day and many days and months later.

More in this category: « Miss Peregrine's Home for Peculiar Children American Honey »
back to top