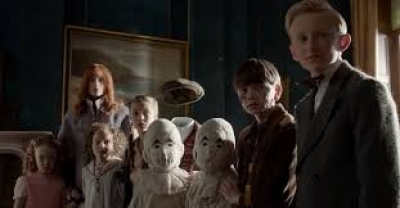 Jake (Asa Butterfield) is your typical teenage boy living in Florida with his mother (Kim Dickens) and father (Chris O’Dowd). He works at Smart Aid, gets bullied a bit by his school mates and holds a dear admiration for his grandfather Abe (Terence Stamp). One evening on his way home from work with an associate Jake receives a call from Abe out of breathe and screaming about a key and that the monsters are going to get him. When Jake arrives at his grandfather’s home the place is a mess, the back door is broken and Abe is missing. When he finds him with his eyes missing Abe’s final words to Jake were to go to the Cairnholm Island in Wales and that the bird will explain everything. Abe used to tell Jake stories when he was a child about a peculiar home for children run by Miss Peregrine. Jake tried to explain things to his parents about his grandfather but all that led up to was therapy sessions with Dr. Golan (Allison Janney). Some good came out of those sessions when the doctor recommended a trip to Wales to face his demons and find the truth. Soon thereafter Jake and his father are on their way to Wales. First encounter on the boat the flight of a Peregrine falcon flying overhead which made Jake think he was on the right course.

Once on the island and staying at The Priest Hole Hotel Jake later sets off to explore on his own in search of this children’s home but what he finds deep in the woods is a large home destroyed on September 3, 1943 during the German war by Nazi’s. Soon he finds himself transported back in time to that day in 1943 all day every day because he traveled through a loop. Once back in time the house is beautiful and in this year of 1943 he meets many peculiar children, Emma Bloom (Ella Purnell) the girl that is weightless who must wear lead shows to stay grounded and the love interest of Jake, Enoch O’Connor (Finlay MacMillan) the strange inventor that can bring puppet like objects to life, Olive Abroholos Elephanta (Lauren McCrostie) the girl with special powers to make fire, Horace Somnusson (Hayden Keeler-Stone) the boy of light, Fiona Fruanfeld (Georgia Pemberton) the plant grower, Hugh Apiston ((Milo Parker) the bee boy, Bronwyn Bruntley (Pixie Davies) the girl with incredible strength, Claire Densmore (Raffiella Chapman), Millard Nullings (Cameron King), Victor Bruntley (Louis Davison) the dead boy, the two masked Ballerina’s (Joseph and Thomas Odwell) and a few other characters all under the watchful care of Miss Alma LeFay Peregrine (Eva Green).

It seems the stories that Abe told Jake were correct about the children but stalking the children is the same monster that killed Abe and Barron (Samuel L. Jackson) will stop at nothing along with his other monsters to find the loop’s in the world and get the children. For you see there is something these monsters need from the children and with it the monsters can be closer to being human except for their eyes that is! Emma gets much attached to Jake and hopes that he will stay with her and the other children she even shows him her secret hide out. It seems only peculiars can enter a time loop and in Abe’s time when he reached out to Miss Peregrine and the children he had to take lives to save lives and now Jake finds himself in his grandfather’s shoes. Jake must be careful so as not to find himself trapped in a loop for then he will never be able to return to his parents. He knows what he must do especially when Barron finds the loop and it takes his bravery and that of a secret to bring the children into a final battle between them and the monsters. Full speed ahead for some peculiar children finding truth, love, safety, bravery and the flight of a new day and location no longer in 2016.

I was not familiar with the book but must say I did enjoy the story. Typical Tim Burton though, dark, odd and bizarre but quite enjoyable and a journey that many should go see. The story gets a little long in the middle and somewhat confusing but if you pay attention it all makes sense in the end. The cinematography is exceptional and some great special effects surrounding the children and the monsters but overall the story accompanied by a great score really does project you on a mystical journey that will scare you, make you laugh and thrill you along the way. Green is not only attractive but mesmerizing as Miss Peregrine. Butterfield is unknown to me but probably won’t be for long he really does well taking you on this bizarre ride. Jackson is superb as always and even though Judi Dench has a small role it is memorable. All of the children are brilliant but the stand outs for me are Purnell and McCrostie that help to keep the story alive and intriguing from start to finish although for that little lull in the middle. Overall a great journey for the whole family although there are a few scary parts that may give nightmares to the youngsters. As for the animals in the film there are fish among the skeletons and birds that play an important role but all seem to swim and fly their way to a long life.

More in this category: « The Magnificent Seven Deepwater Horizon »
back to top

We have 266 guests and no members online