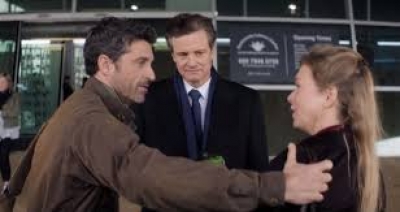 Having not seen the first two films I have to say that this third Movie
in the Bridget Jones series was a hilarious play on the original
character as she stumbles through her awkward relationships with a
love triangle, her family, co-workers and friends. There were not many
scenes that did not have the audience laughing out loud.

Bridget Jones played by Renee Zellweger gives a wonderful comedic
performance as this third sequel portrays her now in her forties
playing that all too familiar life story line of being a successful
business woman but without the husband and family she always wanted.

The movie directed by Sharon Maguire and set in London and the nearby
whimsical English towns was a laugh a minute. Bridgett who is a head
T.V. news producer meets her first weekend romance played by Patrick
Dempsey (AKA Jack a dating Guru) at a weekend music fest while she is
on holiday with her best friend Miranda who is her Anchorwoman played
by Sarah Solemani. As a working team at work their banter is uncanny
but when they take this weekend adventure it’s just gets nuttier along
with Dempsey performance as the single, sexy, knight in shining armor
it was truly entertaining.

Her very next weekend she has a tryst with her Ex. Mr. Mark Darcy,
played by Colin Firth, his humor and facial expressions are his
stuffy, yet sexy character to a 'T' as an English Barrister of
court...as said story plays out... And true to form Safe Sex is not
always Safe and suddenly she finds herself pregnant at 43 and not
knowing who which of her wonderful weekend’s couplings is the real
father. .......This is when it gets very good....
Bridget's OBGYN played by Emma Thompson nearly steals the show
with her dry humor and brutal honesty of the whole love triangle fiasco
that Bridgett has dug herself into. Reactions of family and friends
and how they investigate the "Who's your Daddy" play line will keep you
smiling. As Jack and Darcy somehow manage to infuriate each other yet
somehow work through the awkward three some you can’t help but fall in
love with their characters and how they portray the male species in a
truly heart felt but extremely awkward setting.

"Yes....Dear Diary" there is a happy ending, but you won’t get the
spoiler here...
and of course it sets the all too familiar Dear Diary past and now
present for Bridget Jones up for another sequel.

I truly enjoyed this film and would highly recommend it for anyone who
loves really good comedy attached to the never ending love story of
happily ever after.

More in this category: « Blair Witch The Magnificent Seven »
back to top

We have 663 guests and no members online