The Light Between Oceans Featured 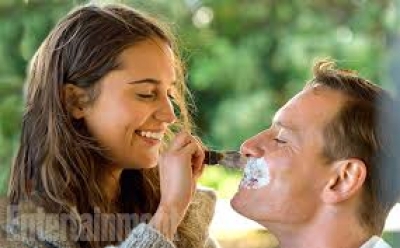 The Light Between Oceans

In December of 1918, Tom Sherbourne (Michael Fassbender), a military hero who suffers from depression brought on by the war has decided to take a temporary job maintaining a lighthouse one hundred miles out in the ocean on Janus island. Unpopulated and not much of anything to do Tom spent three months on this island before learning that his replacement was not coming back. The inland authorities were happy with Tom’s work and asked him to sign a three year contract but thoughts of being alone made him think of a young woman named Isabel Graysmark (Alicia Vikander) that he previously met. He knows he cannot have a woman on the island with him unless they are married and after a small courtship and several love letters later Tom and Isabel are married and she joins him on the lighthouse island.

Not a lot to do on this island for the most part other than maintain the lighthouse, their home and the chickens and goats they both got to know each other quite well. Isabel and Tom wanted to start a family but it seemed life did not want it for them that is until on April 27, 1923 when Tom spots a small dingy floating in the water and he can hear cries coming from within. Inside the dingy was a beautiful newborn baby girl cuddled in the arms of her dead father. What happens next was a disagreement to agree and not one that was legal or moral. Tom did not report the incident in his logs nor to the authorities out of love for his wife and the emotional struggles she was currently bearing so they claimed her as their own and buried the deceased man.

When they eventually took the child known now as Lucy (Florence Clery) to visit Isabel’s parents Violet (Jane Menelaus) and Bill (Garry Macdonald) for her christening it is then on the grounds of the church cemetery that Tom discovers who Lucy belongs to, Hannah Roennfeldt (Rachel Weisz), the daughter of a very rich man. Time passes and guilt consumes Tom leaving him within his heart to eventually reveal the truth about Lucy which in the end leaves him with no choice but to take the blame and try to save Isabel from being found guilty of a crime as well. It seems Lucy-Grace has nine lives and the power of the human mind is strong and revealing so the truth will come out and set you free but all in all depending on the circumstances you may also pay a valuable price in the end and sometimes the innocent are the ones that hurt the most. Yet years later in August of 1950 sometimes miracles do happen yet sometimes they come along too late.

I really enjoyed this story which is directed and written quite well. I did notice a flaw in the conversation outside a church between Tom and a friend when he states something about Lucy’s real father. Other than that which threw me off a bit if I heard it right this story is extremely moving emotionally. I tend to love period pieces and when you add a nice score and some beautiful cinematography this film really draws you in and gets you involved in the lives of the main characters. I also question the placement of the lighthouse on this island if it serves its true purpose at 100%? Either way beyond some slight questions, this story is beautifully projected on the big screen and plays out as if you’re sitting there reading a great novel.

I have become of fan of Fassbender and once again he does not disappoint as he plays the somewhat quiet and reserved man of war. Vikander at first I thought she played too young for her role but as time grew so did I in falling in love with her as Isabel. Weisz is truly superb as she struggles with some major decision making in her life as Hannah and Clery is just adorable. Some nice supporting roles and a wonderful story surely help make this film worth seeing not only for women but on date night as well. Wow as I finish this writing I just noticed on the bag of chips I’m eating they have a lighthouse on the front, life is filled with messages if we only pay attention to our choices and make the right ones.

More in this category: « Morgan Sully »
back to top

We have 725 guests and no members online