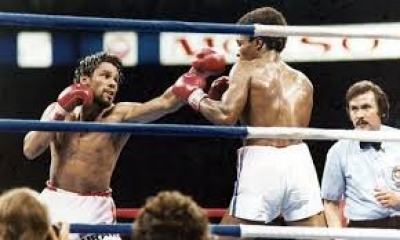 On September 13, 1971 at Madison Square Garden Roberto Duran (Edgar Ramirez) changed Ray Arcel’s (Robert De Niro) life forever. On January 9, 1964 in the Panama Canal Zone young Panamanians are protesting outside the U.S. Military Embassy and not much later riots ensue on the streets of Panama. The conflict lasted for three days and one young boy helped feed his family and fought for his money with pride on the street s of Panama, that boy was Roberto Duran. One day while peddling papers he walked into a gym and asked a man named Plomo (Pedro Perez) to be his trainer, the man laughed until he saw this kid fight on the streets and later accepted the offer, training Roberto for many years.

In New York City, 1953, Ray Arcel is attacked by the Mafia and after being critically injured he eventually was informed his life would be spared if he never made money in the boxing world again. On October 28, 1971 Ray decides to train Duran but for no money while teaching him that boxing is truly a mental sport. Still very young, immature, uneducated with raging hormones Duran takes a liking for a local school girl, Felicidad Iglesias (Ana de Armas). Ray again meets with the Mafia this time Frankie Carbo (John Turturro) and guarantees him he is working for free and to watch out for the new golden age of boxing with Duran.

In June of 1976, Duran fights and wins against Buchanan (John Duddy) which is broadcast on television. Ray’s method of trying to teach strategy to Duran seems to be working when he accepts it but still has some resistance and immaturity towards the method. Yet during the 1970’s Duran was winning fights making money and also an expanded family with five kids. Life really takes a turn when Felicidad recommends to her husband Roberto he needs to fight the America champion, that being Sugar Ray Leonard (Usher Raymond) and in June of 1980 a new world champ had risen. Soon a secret that Ray Arcel has kept from his wife Stephanie (Ellen Barkin) is revealed and Sugar Ray has asked for a rematch that can make millions for Duran. In July of 1980 Duran meets his long lost father and his best friend Chaflan (Oscar Jaenada) is killed and while Duran parties and gains weight is chances of making a rematch are far and in between.

Under the watchful eye of Ray, Duran works to make his weight goal but fears he needs more time. Don King (Reg E. Cathey) the only black promoter in boxing states he cannot go to CBS and demand an extension so Duran works overtime. On November 25, 1980 during the rematch fight Duran walks away expressing “no mas” realizing he needed to retire. It took some time and much heartache later for Duran to grow up and realize what was important in his life knowing he still needs to fight but doesn’t have to win. With an old but new trainer behind him Duran has become a man at 32 years old and decides to take on twenty four year old Davey Moore as a comeback on June 16, 1983. Happy Birthday Roberto Duran, he’s back!

This story was great, well directed and written outlining the life of Roberto Duran. There is definitely some nice character development in regards to the leads even though in the beginning of the story it jumps around a bit. I was totally not aware of the life of Duran but this film has truly educated me about this man and the boxing world. The story really reaches into the soul of this man as it follows Duran as a boy to a young man and finally a man understanding what really matters in life. Many people especially those surrounded by money begin to lose track of what really matters letting greed or sometimes fear run their lives. Duran had lost his way but thankfully found it before it was too late and this film does a terrific job of expressing this boxer’s world and the friends, family and supporters that surrounded him.

De Niro once again is exceptional bringing his A game from start to finish. Ramirez who I happen to not be familiar with was an absolute great casting choice and does justice to the life of a boxing legend. De Armas, Barkin and Jurnee Smollett-Bell who plays Leonard’s wife are all great supports to their male actor companions as are all the supporting actors in this remarkable true story. As for one big familiar face that doesn’t use his voice but shows quite a bit of his naked backside Usher proves that he can act and fight as well. Not everyone may be into a boxing film but this story really encompasses so much more than just fighting it reveals the true inner struggles of one man lost within his own head and the affects it has on everyone around him.

More in this category: « Ben-Hur Don't Breathe »
back to top

We have 209 guests and no members online