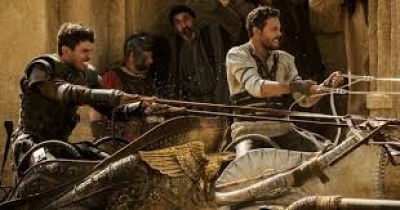 Metro-Goldwyn-Mayer, Paramount Pictures and LightWorkers Media present a PG-13, 3D, 124 minute, Adventure, Drama, directed by Timur Bekmambetov, screenplay by Keith R. Clarke and based on the novel by Lew Wallace with a theater release date of August 19, 2016.

Judah Ben-Hur (Jack Huston) is a Prince of Jerusalem and his brother, not of blood, Messala Severus (Toby Kebbell) is of a different religion. In the eyes of Judah, Messala is a true brother but not so much to his mother Naomi (Ayelet Zurer) who mostly wishes they did not speak because of his Roman beliefs. It seems that Judah’s younger sister Tirzah (Sofia Black-D’Elia) has taken a liking to Messala as he has to her but the relationship never seems to flourish. Love does flourish though for Judah as he takes a servant girl, Esther (Nazanin Boniadi) to be his wife. Meanwhile Messala has chosen to leave Jerusalem and fight for the Roman army whereas three years pass with no contact with Judah leaving him unaware if Messala is dead or alive.

Judah has always been a fair man, a man of morals and justice and when a young injured man named Dismas (Moises Arias) is running from authorities Judah allows to shelter him in his home. After so many years Messala returns to Jerusalem and meets with Judah and asks for his cooperation to have the Roman army march through the streets with Pontius Pilate (Pilou Asbaek). Is there a God? If so why has he not done something to make the world better? Messala questions Judah about this God and if so does Jerusalem live in peace or in fear specifically regarding the Romans. When Judah agrees to Messala’s request with no threat to the Prefix not all goes as planned as Dismas tries to kill the Prefix while on horseback riding through the streets of Jerusalem with his army. It did not take much for the Roman army to react as Judah and his entire family under the command of Messala was taken away for crucifixion. Although as for Judah who took the blame for the incident he was accused of treason and was sent to the gallows in Port of Tyrus.

Five years go by as Judah rows a war ship for the Roman army. He knows nothing of his wife, mother or sister but he knows the hatred he holds toward his brother Messala. Yet in the Ionian Sea during a gruesome battle Judah finds himself later drifting alone at sea lost from any other human beings friend or foe. Finally one day he opens his eyes and finds himself surrounded by several beautiful white horses. These horses are owned by Ilderim (Morgan Freeman) an African that is in Rome to participate in the chariot races. It is during this time with Ilderim that Judah gains his strength, learns what has truly happened to his family, makes a deal to race his horses in return for justice in return for nursing his one horse back to health. Later in a brutal and horrific chariot race which has no rules it is Judah and Messala that race to the end with only one winner. If one lives by the sword he shall also die by the sword. The kind man of Jerusalem known as Jesus (Rodrigo Santoro) gave his life of his own free will in order to save those of faith. Upon forgiveness man should never look back but rather know that life is always ahead of you.

I enjoyed this film even though it does not come close to the original with Charlton Heston. It just does not have that epic feel to it. So I’d say any chance of an Oscar nomination is far from thought. Although the score and the CGI is done pretty well as are the costumes and cinematography I believe the writers could have done better on developing some of the sub-plots. The direction is well done for the most part but I think if they took some of the supporting characters and intertwined them more into the story line I may have liked the film even more. It is mainly the story between Judah and Messala with the other characters including Jesus used as fill. I would have liked to have seem more about the leads relationships rather than those members coming in and going out with very little to say. Overall though for a modern day making of a classic like Ben-Hur it has more good elements than bad by far and is truly worth seeing but you may have to stretch your imagination a little when it comes to faith. When I did that and felt it from within I truly felt inspired and hopeful that there is a higher power that watches over us known as God.

Huston was awesome in this role and truly brings the character of Judah to life on the big screen. I found myself not as inspired though with Kebbell who to me seems to fade in and out when it came to the likeability factor making me appreciate Huston even more. Santoro made a pretty good Jesus looking the part mostly but his role was so small that it was hard to judge him for more than a supporting character to help the story line. Although I must say during his crucifixion I was truly moved emotionally even though it was a quick moment in the story. Boniadi is probably the only woman to have a decent size role and does it justice whereas Zurer and Black-D’Elia are hardly heard from during the film. Freeman is near perfect in everything he does and once again he does not disappoint. There are a number of animals used in this film from dogs to rats but mainly horses and after watching those race scenes one can only hope the AHA was doing their job.

More in this category: « Kubo and the Two Strings Hands of Stone »
back to top

We have 575 guests and no members online