Kubo and the Two Strings Featured 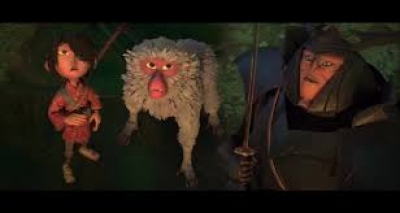 A young mother who lost her husband is at sea trying to make it to land when her boat is struck by a huge wave. After receiving a head injury she awakens on a beach with her young son a distance away. She crawls to him and cuddles the child in her arms; it seems the baby wears a patch over his face due to previously losing an eye. As time passes and Kubo grows he tends to take care of his mother in a home they live in atop a large rock overlooking the sea. Kubo (voice of Art Parkinson) is a storyteller and he travels to the village to tell his stories on the streets to many fans young and old.

One day when Kubo is visited by his two evil Aunts (voice of Rooney Mara) that want to take him to his evil Grandfather the Moon King (voice of Ralph Fiennes) so that he can take the boy’s other eye his mother defends him and gives her life to save his. Kubo awakens in the snow to the eyes of an unfamiliar but later familiar Monkey (voice of Charlize Theron) looking over him. It seems that Kubo must take a journey creating his own story as he moves along to find a sword, chest armor and a helmet, everything he will need to defend himself against his Aunts and Grandfather. He comes across another ally known as Beetle (voice of Matthew McConaughey) who assists him on his journey. Along with Monkey, Kubo and Beetle battle a skeleton and his Aunts to find the sword and later the armor. His last piece is the helmet and thankfully all this time it is also the magical power of his strings that help him and his friends as well.

Memories are powerful and one should never lose them. Kubo does everything he can to hold on to them. Yet the magic within the soul of the Monkey is fading and she fears Kubo will be alone. He does have Beetle as a backup yet when it comes to the final fight with his Aunt, Kubo stands alone as his hard, cold, perfect grandfather comes to take his other eye. Luckily Kubo has found his helmet but will it be enough to battle the Moon King, save his eye and defend his home once and for all?

I thought the story here is excellent and I love the values behind Kubo’s quest yet the only major issue I have is that the story is very much on the dark side with little humor to lighten it up. I’m not sure the younger audience will be able to follow it but if not the animation is well done other than again in some of the darker moments it tends to lose some of its power. Children will definitely be faced with life and death, memories, heaven and hell and the power of community. The older audience will appreciate the plot I believe but the younger demo may get a bit lost. Overall it’s a very well done animated film with some great voices behind it but with other animated films out there I think this one with a lesson to learn and good values to back it up may get pushed to the side rather quickly. Too bad because it really does have a good message especially in this day and age.