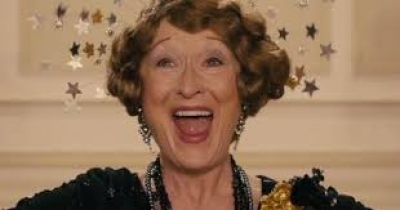 Florence Foster Jenkins (Meryl Streep) is a wealthy heiress suffering from Syphilis which she contracted from her first husband at the age of 18 and now for the past 50 years living in New York City in 1944 she struggles every day from the effects of the disease. Thankfully with the help of her current husband St. Clair Bayfield (Hugh Grant) she manages to live a semi-normal life. Although they have an agreement to abstain from sex he shares his life in another apartment with his girlfriend Kathleen (Rebecca Ferguson), making you wonder if he really loves Florence or if he is in it for her money. One would think it is for love.  She performed at the Verdi Club in the city because of her love for the Arts especially music. Luckily though on stage she was seen but rarely heard due to the fact of her horrible voice.

She practices every day with the leading vocal coach in the city Carlo Edwards (David Haig) along with a young pianist Cosme McMoon (Simon Helberg) whom she hired for $150 a week which is quite a bit of money back then. Everyone that loved her acclaimed her as brilliant but for McMoon it took some coaching from Bayfield to get on board. Her one request was to have a concert for many of her friends, critics and fellow music lovers in the city so behind her back both Bayfield with the help of McMoon paid off a room full of people to sit through her concert and appreciate it. This was a tough task for several especially Agnes Stark (Nina Arianda) who attended the event with her husband Phineas (Stanley Townsend). Agnes was the beautiful bombshell with a big mouth and no filter to shut her up, although she was a lot of fun.

Shortly thereafter Florence visits Melotone Recording Studio and decides to record a record that she can give to all her friends at Christmas. She always walked around with a briefcase and McMoon always wondered what was in it, one day he finds out! It wasn’t until Florence makes it on a local radio show with her record does she decides to perform at Carnegie Hall. A live concert for her friends and 1000 soldiers which is a wonderful act of kindness that leaves Bayfield perplexed on just how he is going to pull this off to make the crowd love and appreciate her. As for Florence death has been her constant companion which she has fought off for so many years and she is still standing so the sky is the limit. The concert does go on, Florence does her best, Bayfield buys every paper in the city to hide the reviews and McMoon is thrilled he got to play Carnegie Hall. As for Florence she realized people can say she couldn’t sing but not that she didn’t sing yet in the end it is an angel that gives her what she always wanted, love, peace and the music within her heart. Oh yes and a bestselling record!

I enjoyed the film and the knowledge I obtained about someone I knew nothing about. Having friends of my own in the city that appreciated Carnegie Hall and the Opera I personally had the opportunity to have lunch with several of them in my friend’s penthouse in New York City, a hotel they owned across the street from the Hall. I remembered how honored I felt and appreciative of the kindness of the famous people with voices from God. I can see how Florence would so want to be part of the world of music and the joy it brings ones soul. I went into this film thinking it was going to be downright hysterical but what I got was several laughs yet sadness for a woman that was dying for 50 years and no amount of money of course that she had would buy her a cure but the world of music was her real medicine, along with a devoted husband and some very good friends. There were several times I felt I was at a play rather than a movie making me feel like I was part of the story. A time in history I wish I knew especially because of the swing genre, the clothes, the personalities of people and the love of true art. You will enjoy this story for what it is which at times moves a little slow but is still worth the ride.

Streep is phenomenal and once again proves there is truly no role she cannot conquer. Grant I heard was honored to play by her side and it shows in his performance. Helberg is awesome and adds so much levity and mystery to the story. Arianda is perfection right down to her blonde bombshell moves. Ferguson and the rest of the supporting cast all work well to tell the true story about a woman who once lived and loved for what was in her heart, music.

More in this category: « Suicide Squad Hell or High Water »
back to top

We have 410 guests and no members online