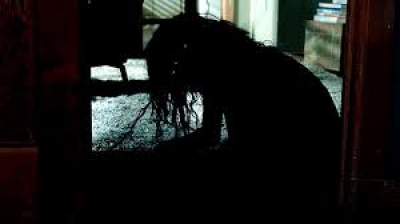 Review written with 3.5 paws out of 4

When we were kids most of us I believe were afraid to sleep in the dark but as adults it’s a whole other story if you’re afraid to sleep with the “Lights Out”. One night at Wells Textiles Sophie’s (Maria Bello) husband Paul (Billy Burke) is working late with Esther (Lotta Losten) one of his employee’s that is until she has an encounter in the warehouse an encounter that Paul has as well but his was much more violent especially in the dark.

Back at home Martin (Gabriel Bateman) is afraid to sleep in the dark and mom is constantly in her room talking to herself. Martin’s older sister Rebecca (Teresa Palmer) is dating Bret (Alexander DiPersia) and lives outside the family home above a Tattoo shop downtown. At a younger age Sophie (Emily Alyn Lind) was living at Mulberry Hill, a mental institution where she met a young Diana (Ariel Dupin). It seems Diana did not want to give up their friendship all these years later even in death so she still lives in the shadows but not without reason. Sophie’s first husband and the kid’s father mysteriously disappeared years ago with no explanation. When Martin comes face to face with Diana (Alicia Vela-Bailey) and his mother is no support he moves in with Rebecca but not even leaving his mother’s home will keep Diana away. It seems Diana is obsessed with Sophie and very protective of her or one might say controlling of her. Sophie wants to have a life with her children who happen to mean the world to her but whatever gets in the way of her and Diana is fair game.

Sometimes the strongest thing to do is face your fears. Not the best advice from Martin to his mother since Sophie is always at her worst and never strong enough to fight Diana even if she wanted too. One night when Rebecca, Bret and Martin decide to stay at Sophie’s for the night in hopes of helping her is the night when Diana gets angry with all lights out and no one is able to stop her rage not even the LAPD. Only one person can stop Diana and this person knows exactly what needs to be done knowing that there’s no Diana without her friend.

I am already a huge fan of the director because of “The Conjuring” and now even more so because of “Lights Out”. I think we have all heard things go bump in the night and at times believe we have even seen figures in the dark. I know I have many times and can honestly say I was not asleep or dreaming. Too many times to count which is why I enjoy a well done horror film. This story is well written with no holes, well maybe one and very well done character development leaving no guessing to the plot. Yes some may say it’s a bit cliché but there are several scenes that are off the radar bringing intrigue, suspense and pure horror without the gore. This is not your slasher Michael Myers or Jason Voorhees type of film but rather one that is well told with edge of your seat chills around every corner. Even the score brings intensity along with the elements of fearing any dark corner of a room knowing that Diana could be there. It may be slightly predictable at times but there are those moments when you will jump from pure fright.

A small cast but very relevant to the story and the characters involved the writers do a great job of keeping the story intimate. Bello is superb as the mother that appears mental but is truly somewhat sane. Palmer plays the strong young woman that will not take crap from anyone not wanting to end up like her mother at least the mother she thought she was. Bateman is believable and the perfect little brother that handles the scare factor pretty well most of the times. DiPersia is the boyfriend every girl would want even when they think they don’t, always there in good and bad. Last but not least besides a few smaller cast members Vela-Bailey does a nice job of bringing the creepy to the big screen as Diana. Something tells me she might be back!