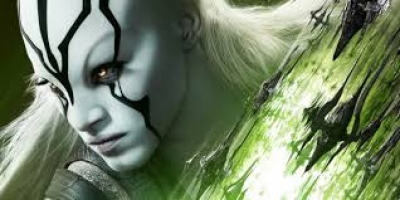 It seems that when Captain James T. Kirk (Chris Pine) tries to offer a small gift to some alien life forms in the solar system it is not them that want it but rather someone from Kirk’s past. Life in outer space can be lonely even though the crew grows to be your family it is just not the same and both Kirk and Commander Spock (Zachary Quinto) are questioning their future. Kirk is becoming a day older, Spock is dealing with a break up with Lieutenant Uhura (Zoe Saldana) and after this next rescue mission to save some stranded allies in space both men are secretly thinking of leaving the Enterprise. What turns out to be a rescue mission for others turns out to be a rescue mission from a swarm of Krall’s (Idris Elba) forces for what’s left of the crew on the Enterprise. It turns out that Krall wants the Abronath artifact and will stop at nothing to achieve it.

When the Enterprise is attacked beyond saving what’s left of the crew tries to make their way in pods off the ship. Many of the crew members that survived before making their way on to escape pods are captured and taken hostage by Krall and his forces. Kirk and Chekov (Anton Yelchin) find their way on a distant planet as does an injured Spock and Doctor ‘Bones’ McCoy (Karl Urban) but it is Montgomery ‘Scotty’ Scott (Simon Pegg) that finds himself surrounded by other unfriendly beings when he emerges from his pod. Thankfully a stranded Jaylah (Sofia Boutella) from another species finds Scotty and saves his day meanwhile making a commitment to each other that she will help him if he helps her with his engineering skills at her home which happens to be the old U.S.S. Franklin.

If Krall gets the artifact in his hands which is hidden in a secret location by Kirk life for the human species will never be the same. It is the strength within humans though that keeps Krall alive but it is the fear of death that keeps humans alive. Kirk has a plan to break out Sulu (John Cho) and the rest of the crew from Krall’s headquarters before they all die and with the help of Jaylah and the remaining Enterprise crew he will save the people of York town and destroy Krall. Obviously in the bitter end space is not their final frontier but rather one that they plan to explore for a very long time.

This film was phenomenal in 3D and IMAX and the special effects were visually captivating. The story was written well, making sense from start to finish and the direction superb. Are there some farfetched moments, well of course there are, it would not be “Star Trek” without some off the wall personality and tongue in cheek moments thrown into the mix. A great score and some bizarre creature characters make this outer space adventure worth seeing for sure. I am looking forward to the next installment sadly without Yelchin since his untimely death but it was nice that the film makes a dedication to him and Nemoy.

Pine has really grown into a wonderful diverse actor in Hollywood and he really has taken on the character of Kirk proving that he cannot only oversee a ship as Captain but bring a movie into box office success. Quinto shows a lot more personality and emotions along with humor as Spock in this story solidifying his role as an in demand actor. Urban really pours it on making you laugh and agree with some of his reactions in the film. Saldana although having a smaller role is definitely an important one. Pegg who happens to be one of the writers was sure to include him in much of the film which supports the whole plot and beyond. Cho is a good support as is Yelchin who seems to have a bigger role but it is Elba that controls many of the scenes as does Boutella who now becomes a bigger entity to the franchise. There are many animal type creatures throughout this story many that are non-specific to any type of known breed but they all are perfect to the making of yet another great “Star Trek” movie.

More in this category: « The Infiltrator Ice Age: Collision Course »
back to top

We have 308 guests and no members online