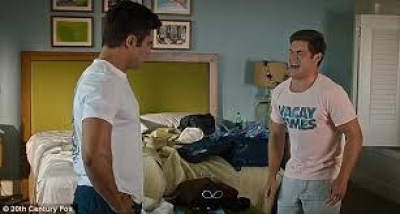 Twentieth Century Fox, TSG Entertainment and Chernin Entertainment present an R rated, 98 minute, based on a true story, sort of, Comedy, directed by Jake Szymanski, written by Andrew Jay Cohen and Brendan O’Brien with a theater release date of July 8, 2016.

Mike (Adam Devine) and Dave Stangle (Zac Efron) are two wild and crazy brothers who sell liquor for a living and if they don’t find trouble it will find them. Their parents Burt (Stephen Root) and Rosie (Stephanie Faracy) have a slight intervention with the boys along with their sister Jeanie (Sugar Lyn Beard) and her fiancé Eric (Sam Richardson) about the upcoming wedding in Hawaii. It seems everyone but mainly Jeanie want the boys to bring dates to the wedding but not just any date the family wants to see them with respectable women. The guys decide to take out an ad on craigslist expressing two hot guys looking for two women to join them on a vacay/wedding to Hawaii. Well the ad goes viral with thousands of women on hot pursuit heck the guys even end up on Wendy Williams. It is this show where Tatiana (Aubrey Plaza) and her best friend, dumped at the altar Alice (Anna Kendrick) see the guys and make a plan to meet them. One problem, these girls are the female versions of the Stangle brothers, Mike and Dave.

After some adjustments to their looks the girls are in pursuit and one car hit later the girls are on their way to Hawaii. Acting all adult and lying about their lives the girls meet Jeanie and Eric along with their families and all goes swimmingly. For now! Mike likes Tatiana but her feelings are not quite the same but Terry (Alice Wetterlund) Mike’s lesbian cousin likes her a little bit more. Let the competition begin! An ATV ride through Jurassic Park leads up to a burn victim Barbie and black Ken for the bride and groom but it’s not until the special massage by Keanu (Kumail Nanjiani) and a finger licking good time in the steam room between Tatiana and Terry does matters get out of hand. Love hurts and in this case during the wedding rehearsal truth is told, the horses are released and two Lady Godiva’s express themselves with a little help from Alice and her stash. Come wedding day realization sets in for everyone and once again the boys plus two girls are back in the limelight dancing to a slightly different rhythm.

I absolutely enjoyed this film and laughed many times throughout. Is it silly, a little crazy, senseless and outlandish of course but that is what makes it work. There are obviously some cliché moments that resemble some other popular and money-making films of the past but either way this story is quite hysterical. Well directed and even more so better written with a good score and some great back-drops this film should do well and carry over for a few weeks even though it’s got some stiff competition in the theatres right now as well as in the stables. You’ll understand that comment when you see this film!

Efron not only looks good but he is really coming around as an actor and truly getting even better from one film to another showing that he is diverse in many ways. He is absolutely not afraid to make fun of himself. Kendrick shows her comedic side once again with both a rough and pretty look in the film and is the perfect match to Efron and his character. Devine who I know from “Modern Family” is hysterical and probably the funniest of the whole bunch with Plaza to bounce off as his sex interest she too proves to handle comedy quite well. Beard we get to see quite a bit of as we do with Nanjiani as well but as for the comedian side to her character she is right up there with Devine. Richardson is the straight man as are the crazed parents Faracy and Root but no matter at whatever moment in the film there is laughter around every corner which by all means this world needs a little more of right now.

More in this category: « The Legend of Tarzan The Secret Life of Pets »
back to top

We have 539 guests and no members online