The Legend of Tarzan Featured 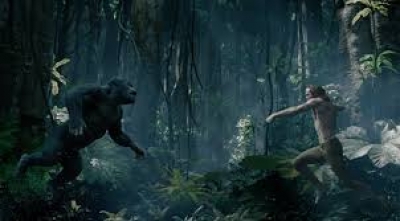 The vast African Congo has been split by exploitation of Ivory and other animals and elements of the land. Nothing though is more in demand than the diamonds of Opar and Captain Rom (Christoph Waltz) is in negotiations with Chief Mbonga (Djimon Hounsou) that along with his vast tribe control what goes on in his part of the Congo. Chief Mbongo will work a deal with Captain Rom if he is able to bring him one man, that man being John Clayton III otherwise known as Tarzan (Alexander Skarsgard). You see in the past there was an incident between Chief Mbongo and Tarzan that was near and dear to both of their hearts and ever since that moment the Chief wanted nothing from Tarzan other than his death.

Through a series of flashbacks the audience is able to witness why Tarzan grew up in the Congo, what happened to his human parents and just how he became adopted so to speak by a group of apes. Accepted by most but not all this baby grew up and learned the ways of his ape parents and the rules of the wild and the tribes that live among the lands as well. When he became older he encountered a young woman that needed his help her name was Jane Porter (Margot Robbie) who later in years married Tarzan and moved to London to live out their life.

That is until Doctor Williams (Samuel L. Jackson) and parliament request that Tarzan travel back to Africa to meet with King Leopold. Little does Tarzan know though that once there he would face Captain Rom and his men who are in negotiations with Chief Mbongo to trade Tarzan for the diamonds on his land. Yet Captain Rom has other motives besides the agreement with the Chief. Against his wishes both Tarzan and Jane along with Doctor Williams go back to the Congo where they eventually meet up with old friends. Once back in the Congo he felt at home with the many animal species from lions to elephants but he knew when he came face to face with his ape family he would have to win the respect of the group and even more so his ape brother. When they arrive at the Kuba village the chief and the villagers welcome back their family members, Tarzan and Jane, but later in the night they get an unexpected visit by Captain Rom and his men and war breaks out. They tried to capture Tarzan but instead took several villagers and also Jane.

In his journey to save Jane and the others Tarzan is faced with many decisions and heart-breaking human deeds but he also learns that Captain Rom is looking to take control of the Congo and will stop at nothing to make it happen. There are many obstacles in the Congo and many animals like ostrich, elephants, hippos, ants, gators and so much more that are friends to Tarzan but not to any other humans found within their path. It breaks my heart to see that mans greed to kill just for fun gets in the way of the true beauty and importance as well as the family structure that lies within the souls of all the different species of the Congo. This film truly does a great job of touching your heart about the plight for survival of all living creatures and the pain that swells from their loss whether man or animal.

It’s not until Captain Rom enters the Port of Boma that all hell breaks loose. He stills holds Jane, Tarzan has come face to face, hand to hand with Chief Mbongo and in the end it is true friends man or beast come to save the day, Jane and that of any possibility of a future Tarzan. Tarzan was known as the evil spirit, the ghost in the trees but he is truly the spirit of the jungle and the friend to all that live within its canopy be it man or beast. Why is so called civilized man so afraid of what they don’t know or except? That is a question that forever seems to live on but should not and it is the hand of man that can make a difference in a good way rather than bad.

This film is brilliantly directed and equally written, it tells the entire story of Tarzan from childhood to adulthood leaving no holes of mystery along the way. The score is superb and the cinematography enchantingly beautiful with so many scenes of the Congo, the people and animals within the lands including the trees and waterfalls that add true proof of a land that I pray never changes or disappears. Sadly to say due to mans greed the lands and animals are already being ripped apart by humans and the disgraceful need to line their pockets with money. This film has a wonderful message woven throughout the story that does not hit you over the head as if to preach but if you don’t understand it or believe in it than bad on you. It has a few slow moments but none enough to point out since soon thereafter something astounding happens that gets your adrenaline flowing.

Skarsgard is the envy of man and the want of women and rightfully so with his chiseled body, intelligent mind and dedicated spirit to a place he calls home and the animals that live among the great lands there. Some of the fight scenes between his character and both man and animal are phenomenal. Robbie is not only beautiful but proves that true beauty is found from within and when needed it can kick ass like the best of most men. Jackson adds much levity and intrigue into the story and is a pure joy on the big screen as always. Waltz is a great actor and proves once again he can take whatever is given to him and make it perfection. Hounsou is not in the story a lot but does well as the Chief bent on revenge. There is a huge cast of supporting actors and extras that help bring this magnificent story of Tarzan to life on the big screen. Several directors and writers have tried to bring Tarzan to a big screen or television near you but this one I’d say is probably about the best.

More in this category: « The BFG Mike and Dave Need Wedding Dates »
back to top