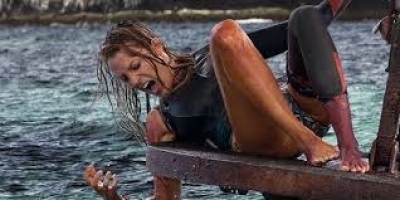 Nancy Adams (Blake Lively) is a beautiful young med school student from Galveston, Texas who has set out to surf a no name secluded beach where her mother once visited in 1991 when she was pregnant with Nancy. Carlos (Oscar Jaenada) a native to the area has offered to give Nancy a ride to the beach but while driving there her best friend once again stands her up for a guy so Nancy hits the surf alone. Little did Nancy know she was not alone on the surf there were two other surfers as well who ends up giving her the ins and outs of the waters, one being that the area is shark free? Yeah right! She face times her little sister Chloe (Sedona Legge) and her father (Brett Cullen) who worry about her being alone on the beach without her friend but like always Nancy is a strong willed person and able to stand on her own two feet.

It’s getting late into the evening and Nancy decides to hit her last wave. The guys are on the beach and packing up to go home but little did Nancy know what would happen next. As she rides her wave she gets hit by a Great White Shark and from that moment on her nightmare begins with no one to help her. Stranded on a whale carcass she tries to make her way to a rock before a second attack but before she knows it the whale is hit and Nancy swims for her life. Once on the rock bleeding profusely she befriends a seagull that was also injured in the last hit and both wait out the cold and scary night. What happens the next morning is something she did not expect but in the end she tried everything she could to prevent the horror in the waters.

As high tide comes in Nancy and the bird have no choice then to move off the rock. The bird goes one way and Nancy the other as she swims for a light buoy a few yards away. This being her closest option since the shore is at least two hundred yards out. In a bitter fight to the end one dies and one lives to once again swim the open waters of the ocean.

There is a lot that goes on during this story which contains a small cast but a lot of suspense and thrills. Lively truly holds your attention throughout the entire film as her character fights to stay alive during this one on one battle with a killer shark with a mouth full of teeth. The cinematography is phenomenal, the length of the film just enough, the score superb and Lively is looking good from head to toe. I must say this film is this generation’s version of “Jaws” very real and of course very possible especially with shark attacks on the rise. Brilliant direction and use of the camera above and below the water surface with minimal writing the real star here is Lively who carries this entire 87 minutes from start to finish. Like Tom Hanks in “Castaway” Lively keeps this film moving with her actions, attitude and will to live. In the end I don’t think I want to go swimming in the ocean again any time soon so I think I’ll stick to my pool. Yes the movie is that good and intense. Surfs up!

More in this category: « The Neon Demon The BFG »
back to top

We have 437 guests and no members online