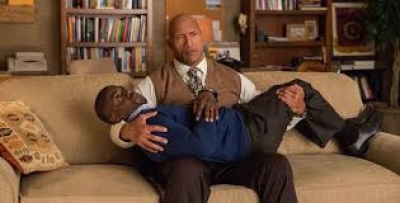 Twenty years ago from present time at Central High School a chunky young Robbie (Sione Kelepi) is showering in the boy’s locker room singing to his favorite song. Suddenly Trevor (Dylan Boyack) and his friends take him hostage. Out on the basketball court the entire school is honoring senior student Calvin “The Golden Jet” as the student most likely to succeed. The hallway doors open and Trevor and his friends throw out a naked Robbie in front of the entire school. Almost everyone laughed but little did Calvin know that what he did at that moment would follow him into his adult life.

Present time: Calvin Joyner (Kevin Hart) is a mild mannered accountant and married to his high school sweetheart now lawyer Maggie (Danielle Nicolet). Calvin wonders what he did with his life and career once thought to be the most likely to succeed he landed with a thump except for one thing and that was getting married to Maggie right out of High School. Their twentieth high school reunion is here and Calvin has no intention of going but when a Facebook message comes across his computer from Robbie Stone (Dwayne Johnson) his entire world changes forever.

Calvin agrees to meet Bob, the man of unicorns, rifles and rainbows, at a local bar for a drink and to catch up on the last twenty years but when Calvin sees Bob nothing is as it once was and Bob has transformed except for the fact he still doesn’t like bullies or homophobes. When things don’t go as planned Bob ends up sleeping at Calvin’s but at sun lights first peep and a knock on the door later by Agent Pamela Harris (Amy Ryan) and her men Bob is on the run and his secret is out. It turns out that Bob is wanted by the CIA for selling secrets after possibly killing his partner Phil (Aaron Paul) some time ago. It seems that many people think Bob is the Black Badger selling keys to satellites to our country’s enemies. Yet when the chase begins Bob knows he needs Calvin’s excellent computer skills to encrypt codes but as for Calvin he has no idea what is going on, who to trust and who the heck is the real Black Badger out to destroy the Free world.

After a trip to Baltimore and a visit to an older Trevor (Jason Bateman) in need of his help for a proper transaction number both Calvin and Bob realize that Trevor Olson has not found God in his old life but rather is still friends with Oscar. A snake later and a flight to Boston Calvin and Bob are about to crack the codes, find out who the Black Badger is while meeting the true Honey Badger. Long story but a good one! In the end, only the good hearted people can change enter high school crush Darla (Melissa McCarthy), who still cares for commando Bob who at this time is gonna get it. As for Calvin and Maggie life is blessed and he and Bob will always have “Sixteen Candles”. Make sure you stay for the bloopers they’re great.

Even though I struggle during this time in a crazy world and all that has happened in Orlando, Florida this night screening of a comedy was a good escape if only for a small window of time. I did not laugh as much as I should but by no means is it because of this funny film. It is smartly written, exceptionally directed with some great visuals, not referring to the nudity and character development that will keep you entertained for the entire story. I love both Hart and Johnson, Hart more since this guy knows how to make a wonderful cocktail filled with drama and comedy but they both don’t disappoint and truly make a great team. Johnson apparently is not afraid of his feminine side and balances it with his manly actions quite well. Ryan is sufficient and Nicolet lightly used in the story as is Paul but overall accompanied by a superb supporting cast this film is very much worth seeing in the theater.

More in this category: « Finding Dory The Neon Demon »
back to top

We have 357 guests and no members online