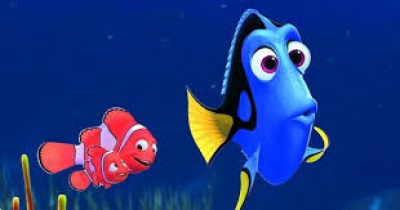 First off I’d like to say thank you to Disney for donating 1 million dollars to the victims of the Orlando, Florida shooting. We have all been affected in one way or another and even more so for the people like me who knew some of the victims. Thank you Walt Disney we wish more companies like you would do the same.

At the screening of “Finding Dory” we are first treated to a short film called Piper about a little sea bird that is coaxed by its parent to leave the nest in the dunes and venture to the beach for clams. When the little bird makes it there a huge wave hits and causes the bird to fear the beach but when helped by a little crab during another wave this little bird sees more than it could ever imagine and from that point on clams of all sizes for everyone. Sometimes if we do what’s right and conquer our fears the world will become bigger and hopefully brighter.

“Finding Dory” opens to a very young blue tang Dory (voice of Sloane Murray) who is being taught the dos and don’ts by her parents Jenny (voice of Diane Keaton) and Charlie (voice of Eugene Levy). Dory who suffers from short term memory loss is told by mom and dad not to go near the undertow since it could cause grave circumstances for Dory. Sometime later Dory is lost and as time goes by she is all grown up and living with Nemo (voice of Hayden Rolence) and Marlin (voice of Albert Brooks) but during a fieldtrip with Mister Ray (voice of Bob Peterson) and some youngsters Dory (voice of Ellen DeGeneres) begins to gain some memories and before we know it she is set to cross the ocean to find her parents last known to be in Morro Bay, California. So Dory doesn’t go it alone Nemo and Marlin decide to join and hence the journeys begins.

After some trying times at sea Dory makes it to the Marine Life Institute thanks to the voice of Sigourney Weaver. Separated from each other Dory goes it alone from Nemo and Marlin but makes some friends along the way, Hank the Octopus (voice of Ed O’Neill), Destiny the shark (voice of Kaitlin Olson) and Bailey the Beluga Whale (voice of Ty Burrell). Dory with the help of other sea life creatures eventually finds out where her parents are or were maybe and heads that way. Nemo and Marlin are hanging out with Fluke (voice of Idris Elba) and Rudder (voice of Dominic West) looking for a way in to the institute to find Dory. Thanks to Becky the wish is granted, somewhat!   Dory follows the shells in hopes of finding her parents but when she ends up inside the institute again this time with the clowns she knows she has to return to the sea and her parents. The big question is how? Seals, an Octopus, and some cute Otters later the motto rescue, rehab and release comes true and Dory did it. It might not have been an easy task and one she did alone but it is truly unforgettable.

I thoroughly enjoyed this film probably not as much as “Finding Nemo” but I did enjoy it. I sat through it with a heavy heart and mind because of the Orlando shootings and thank you Diane for your warm conversation before the film yet I think this story although great was a bit tiring at times leaving out what it needed a bit more, levity. The animation is stellar and the 3D worthy but the writing I thought although quite good could have been just a bit better making some of the adventures more memorable. It will surely entice the children but may become a bit long winded for the adults. It is a cute film with good direction but something is missing. I know it’s neither the adventure, nor the lack of superb animation so I can only point at the comedy and for that matter the lack of the scare factor. If only there were more unknowns around the corner of their adventure it could have made the story more exciting with edge of your seat thrills. Either way I am sure it will do extremely well at the box office but in my opinion it missed the mark of perfect not by a mile but maybe a few yards and I know it wasn’t because of the voice talent since for the most part they did it well. It’s an underwater adventure filled with all species of sea life sure to enchant the child in you or your life.

More in this category: « The Conjuring 2 Central Intelligence »
back to top