Me Before You Featured 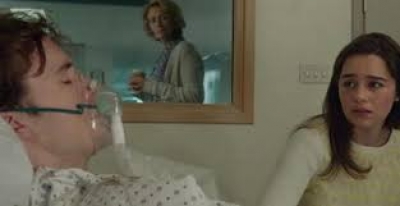 What would you do if you lived in London, you were lying in bed with a beautiful woman, you get up get dressed in an expensive suite and head out the door on a rainy day to catch a taxi when all of a sudden your entire life is changed forever. Will Traynor (Sam Claflin) had that life, attractive, wealthy, athletic and a world traveler, life was his challenge and his playground but now his life has become a harder journey and one that he allows only six months to pursue.   You see, Will was struck by a motorcycle and his entire body from the next down is permanently paralyzed. He has moved in with his parents, Steven (Charles Dance) and Camilla (Janet McTeer) so that they could help him manage for the next six months.

Louisa Clark (Emilia Clarke) is the daughter of Bernard (Brendan Coyle) and Jodie (Samantha Spiro) and the sister to a younger brother and sister Katrina (Jenna Coleman). Katrina got the smarts in the family whereas Louisa got the personality. After being let go at her current job at the Buttered Bun, Louisa visits the job Centre in town in hopes of getting another position after failing in so many other attempts to find work. It just so happens that the Traynor family is looking for a care giver and companion to a disabled man. That man of course happens to be Will. Louisa is a quirky girl with a bright smile and an odd fashion sense for clothing but Camilla sees something in her that might appeal to Will helping him to fight for life and she was right.

As time goes by Will begins to show a liking to Louisa and the walls he built to keep everyone else out were starting to crumble. A friendship was forged that at times seemed to be a little bit more, new life and a reason to wake up in the morning, new activities and trips, all planned by Louisa for Will. Patrick (Matthew Lewis) an avid runner and boyfriend to Louisa for seven years thought the whole situation was a bit odd but in most instances Nathan (Stephen Peacocke) the visiting nurse was around, keeping Will’s health in line. Just when Will was starting to open up Alicia (Vanessa Kirby) his ex-girlfriend and Rupert (Ben Lloyd-Hughes) Will’s best friend make an unannounced visit to inform Will they were a couple. Great news to hear when life just keeps throwing you punches. Thankfully Louisa at 26 years old and Will at 31 have found each other and she does everything possible to keep him happy especially after she discovers exactly what happens to Will in six months, Will’s choice to die with dignity. It seems no one wants that more than Will since his quality of life, the pain he suffers and the constant memories of what was haunts him daily. In the end a final letter, some dreams fulfilled and a message to live well, just live are the wishes of love that will forever be a part of Louisa’s soul.

The film brings up many thoughts about assisted suicide and if you would consider it if you no longer have the quality of life you once had. We make that decision for our pets when they are suffering or just can’t manage like they once did. When is the time to give up and is it the right thing to do? Should it be a choice made by an individual and not that of authorities, religion or family? What if you physically or mentally cannot make that choice of life or death for yourself? Life holds many mysteries but when the will to live is no longer than maybe it should be a person’s right to make their own choice if they can. I liked that this film brought out those emotions or thoughts that so many of us do not, will not or have not thought about. The film gets into a slight romantic relationship between Will and Louisa but there is so much more depth to what is happening here than the possibility of love. The characters are well written, directed, acted and developed but I must admit at times I wished for a bit more raw emotions when it came to the subject matter. A beautiful backdrop to the story and an enchanting soundtrack definitely enhance this film but it is the subject matter that engrosses you and the fact of ones will to live or not.

Clarke was superb, moving in and out of quirky to beautiful inside and out. Not sure if it was planned but I did enjoy her “Pretty Woman” moment as well. Claflin of course doesn’t have a lot of physical challenges here but the emotion he projects with his voice and expressions are spot on let alone his choice to end his own life. I can only imagine what it is like to lose a child and McTeer although brave does justice to those feelings. Coleman, Dance, Lewis, Coyle and Spiro bring much to the table as supporting characters and story lines but it is Clarke and Claflin that bring this novel to life on the big screen. Overall I enjoyed this film quite a bit but my only wish would have been a bit more depth to the writing and some of the characters to give the story line a bit more peaks and valleys albeit you still may need a tissue or two.

More in this category: « The Lobster Teenage Mutant Ninja Turtles: Out of the Shadows »
back to top

We have 322 guests and no members online