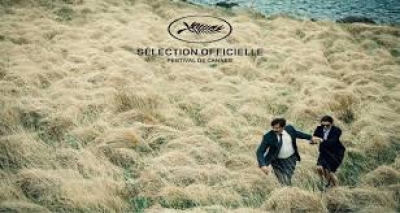 Review written by Jon Patch with 1 paws out of 4

A24, Film4, Irish Film Board and Eurimages present an R rated, 118 minute, Comedy, Drama, Romance, directed by Yorgos Lanthimos, written by Lanthimos and Efthymis Filippou with a theater release date of June 3, 2016.

The story opens abruptly with a woman (Jacqueline Abrahams) driving down a country road in the rain, she pulls over, gets out of the car, walks up to a donkey in a pasture and shoots it. Based on this opening I thought oh boy I’m not going to like this film. Read on…

David (Colin Farrell) is a single male ever since his wife of eleven years and one month cheated on him so he has checked in to the hotel, single room, with his brother Bob, who happens to be a dog (Jaro & Ryac) now to find love in 45 days. If he finds love within that time he can move into a double room and eventually into the city with his wife and possible children. If he does not find it then he is turned into an animal of his choice in the transformation room. David chose to be a lobster and unless he gets boiled he could live for one hundred years at least. Yes right about now you’re like, what? Me too! You can run from this hotel but if you do and you become a loner in the woods in a poncho you stand the chance of being darted by the hotel people. If they dart you they get to extend their stay by a day for each loner they shoot.

David is a shy pot-bellied kind of guy that chose to find a female mate rather than a male. Yes you get a choice! The hotel manager (Olivia Colman) helps with some advice but also makes sure everyone follows the rules. One big rule for the men is no masturbation. I guess if you pleasure yourself you won’t need anyone else! We have the quirky biscuit woman (Ashley Jensen), the nose bleeder (Jessica Barden), the heartless woman (Angeliki Papoulia), the maid who plays both sides (Ariane Labed), the lisping man (John C. Reilly), John the limping man (Ben Whishaw) among several others in the hotel all looking for one thing, love, so as to avoid becoming a rabbit, donkey, peacock, camel or whatever other animal of choice.

In the woods trying to survive away from the hotel people are the loners led by one leader (Lea Seydoux) with the help of others of course. They are able to express themselves but must shy away from relationships as David does when he first joins them that is until he meets the short sighted woman (Rachel Weisz). They try to hide their affection from the other loners and especially the leader but when they can no longer do so they have no choice but to escape this group as well. What happen next is your guess as well as mine! I guess they were blinded by love!

This was one of the most bizarre films I’ve seen in a while. I mean the story line had potential in the first half of the film but it swiftly lost its way in the second half. Strangely directed and even more so written with the characters almost acting in a robotic type movement with little expression or feelings. I thought the story would have had better meaning but when the animal cruelty came in from the start and lingered throughout I was a bit over it. The story could have had potential if only it were better directed and written but by making it obscure they just lost their word of mouth and any potential at becoming anything but strange, even the score was strong but frightening in a way. The director even throws animals in and out in an obvious but bizarre manner. As for the actors they did well based on their direction. Farrell was not only frumpy and awkward but just plain boring. Weisz gives her character a bit more to grab on to but still gets lost in what the director ordered which is a lost opportunity. The film has a good cast but the film is so bizarre that it was difficult to appreciate the actors well known or not. The ingredients in the mix want to be a thinker film leaving you to decide many of the odd situations but overall in my opinion this story missed the mark half way through it at least. Animal lovers especially dog parents beware!

More in this category: « Popstar: Never Stop Never Stopping Me Before You »
back to top