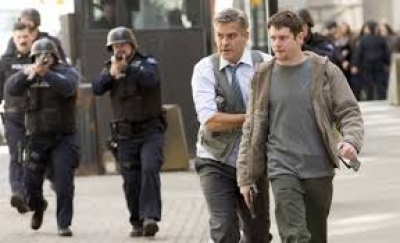 Have you ever invested money in the stock market and lost it all? Do you watch those financial guys on television who promise to be telling you the truth about Wall Street? Well Lee Gates (George Clooney) is one of those guys that hosts a television show called “Money Monster” on FNN. He always has a theme to each one of his shows usually loud, obnoxious and in your face. Think Jim Cramer in real life! Some hosts know what they’re talking about and some don’t! Think Dave Ramsey on the radio! You have to decide for yourself on whether to trust their word or not. Lee Gates can put on a great show thanks to his Director Patty Fenn (Julia Roberts), his Producer Ron Sprecher (Christopher Denham), Cameraman Lenny (Lenny Venito), Bree (Condola Rashad) his assistant and the multiple staff behind the scenes that make the host looks good. But is he right?

Kyle Budwell (Jack O’Connell) doesn’t think so. A matter of fact he poses as a delivery man to get into the building then onset of a live feed of “Money Monster” 2 boxes in hand and a gun in pocket takes control of the show, putting Lee in a bomb vest. When the cameras go off line he demands they go back live or else he lets his finger off the detonator and Lee and the studio is no more. What does Kyle have to lose, his mother died, he is a bit of a loser, and he lost his $60,000 inheritance because of a statement by Lee to invest in a sure thing, IBIS stock. The company is run by a sure bet, CEO Walt Camby (Dominic West) with some help from his CFO Avery Goodloe (Dennis Boutsikaris) and CCO Diane Lester (Caitriona Balfe) nothing could go wrong. Yet when 800 million dollars goes lost supposedly due to a computer glitch in the software program the stock plummets and investors are left for broke including Kyle who invested all his money.

So you see why Kyle raids the FNN studio, revenge, justice, truth and a massive audience to watch the on camera life to death trial unfold. Isn’t everyone sick of the system, Wall Street, politics, the rich getting richer on the backs of the poorer people that surround them. We put our faith in them hoping to find help, survival, and a better life but sometimes faith is not enough but in all cases the truth will set you free. Kyle is the one person out for the truth, grant it not in the most conventional way but he surely gets the attention of people, investors all over the world that are watching everything unfold before their eyes. It is when they leave the studio; walk through Wall Street with on lookers dancing the Mambo to the whole scene does the final showdown take place between a talk show host, a man with a gun and bomb out for the truth and one of the richest men on Wall Street, Walt Camby. What happens in the end is a testament to the world and the corporate bull that the average man experiences everyday on the job and in life. What is a life worth to you? Well it may be less than you think especially when you think you are so loved by millions. Not when you play with their money! Whether in Seoul, the United States, Switzerland or South Africa people want the truth and by all means they deserve it. Buy low, sell high, life or death, Wall Street is like a casino, one big gamble. Yet in the worst scenarios you can bet the ugly will always go viral!

I love Jodie Foster and once again she makes a great quality thinkers film filled with intensity, thrills, a bit of levity but more than anything a film with a message. Great writing with a few off the wall moments this film feels a bit longer than it is but probably because the scenery for the most part doesn’t change much. If I can say one thing though this story makes you think about life and the way you live it wondering if a gamble is really worth it in the end. Clooney jumps through hoops surely unafraid to look silly as a television financial host. Roberts is commanding with no wardrobe changes at all since this story takes place on one Friday afternoon over an expansion of a few hours. O’Connell is riveting playing a man out for his justice which in the end brings justice for so many others. Camby is the typical rat out for his own pocket and West does his character justice. Balfe looks good and proves to the audience that it’s never too late to do what is right. As for the rest of the supporting cast and extras they all help to make this movie worth seeing in the theater. It’s a timely story with a great message that may have not been portrayed in a real life legal manner but it does prove that one person can make a difference. Thanks for the cat scratch viral in the end Jodie, loved it.