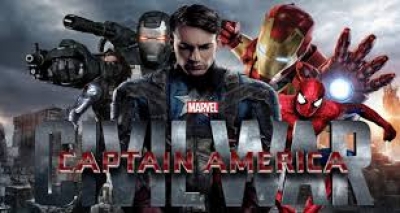 On December 16, 1991 thanks to a man named Zemo (Daniel Bruhl) something happened that may jeopardize the world as well as the friendships between the Avengers. Present day in Lagos Crossbones/Brock Rumlow (Frank Grillo) and a group of his men have taken over the Institute for Infectious Diseases grabbing a biohazard material to use as a biological weapon. Before they can escape with the item they come into battle with Captain America/Steve Rogers (Chris Evans), Black Widow /Natasha Romanoff (Scarlett Johansson), Falcon/Sam Wilson (Antony Mackie) and Scarlet Witch/Wanda Maximoff (Elizabeth Olsen). Once again as always when the Avengers are in battle there is collateral damage and many innocent lives are lost.

At MIT during Alumni Honors Tony Stark/Iron Man (Robert Downey Jr.) is giving a speech and demonstrating a device that takes him back to the day his parents died, a memory that will haunt Tony forever. The U.S. Secretary of State Thaddeus Ross (William Hurt) has called the Avengers dangerous and wants their organization to run under the umbrella of NATO and no longer as a private enterprise. The idea is supported by some in the group but not by all. Meanwhile Zemo is in search of the manuscript from December 16, 1991 and will stop at nothing until he finds it.

In London Steve Rogers is attending the funeral of Margaret “Peggy” Carter which is where he bumps into Sharon Carter (Emily VanCamp) her niece and love interest of Steve’s. In Vienna Natasha is attending a meeting at the United Nations building with a speech given my King T’Chaka (John Kani) father to T’Challa/Black Panther (Chadwick Boseman) when suddenly a massive bomb explodes killing many and leaving T’Challa fatherless. Later in Bucharest Bucky Barnes/Winter Soldier (Sebastian Stan) has met up with old friend Captain America who happens to think the Winter Soldier is behind the blast in Vienna but what might have been a peaceful encounter turned violent when the Black Panther showed up for revenge. In Berlin some time later the Black Panther vows to kill the Winter Soldier and Captain America, Scarlet Witch and Falcon will not sign the Accord to follow the rules of NATO. There is one evil orchestrating the violence and all he wants is to see an empire fall.

Ross wants the Avengers that do not sign the Accord in custody but before matters get worse Stark vows to bring Captain America in within 36 hours at which time Ross will have his way. Stark knows that he, War Machine/Lieutenant James Rhodes (Don Cheadle), Black Widow and Vision (Paul Bettany)will not have the man power to bring the rest of the Avenger’s in for justice so he seeks the help of Peter Parker/Spider-Man (Tom Holland) who until now has been only looking out for the little guy. All for one and one for all Captain America has joined a battle with Falcon, Scarlet Witch, Winter Soldier as well as new members Hawkeye/Clint Barton (Jeremy Renner) and Ant-Man/Scott Lang (Paul Rudd) to battle their comrades to clear the name of Bucky and prove he is not the man behind all the terror and injustices in the world. After the battle Captain America, and Winter Soldier set out to find the answers they seek but before they find out Iron Man who followed them finds out the truth to the pain he has dealt with since a young age. In another battle of arm for an arm secrets are revealed exposing the truth that once again shined revenge of a broken heart. Yet in the end not all is perfect in the world of the Avenger’s but true friends do last forever no matter what the circumstances. Make sure to stay throughout all the credits for some special teasers of what is yet to come.

The film at 146 minutes is about 15 minutes too long since there are a few parts that I thought dragged on they could have been edited out. Other than that the film direction and written story with several twists and added characters is phenomenal and will surely make a lot of money. I thought even though the story surrounds Captain America it is truly not only about him. Great music, costumes, CGI and special effects make this film worth seeing on the big screen in 3D. Pay attention though because if you stray away for even a few long seconds you will certainly miss something that is pertinent to the story line and if you haven’t seen the other Avenger films it might leave you a little perplexed.

Evans is once again spot on as is Johansson who seems to have a bit more personality in this film. Downey Jr. brings on the levity, Stan the strength in a brutal way, Mackie the awesome use of his wings, the Black Panther with his fierceness and sharp claws, Vision and his colorfulness, Olsen and her oddness yet innocence and Renner with his sharpness. Cheadle is not used a lot, Holland and Rudd are both fantastic and thankfully brought in some great special effects and script with them as they joined the teams. Nice to see VanCamp I was a fan of hers in the television shows Brothers and also in Revenge. Bruhl plays well as does Grillo during their shorter on screen time but it is the many other supporting characters and extras that truly brings this film to life. In the end I can’t imagine you will be disappointed in what will surely be a major money maker at the box office for a while.

More in this category: « Green Room Money Monster »
back to top

We have 309 guests and no members online