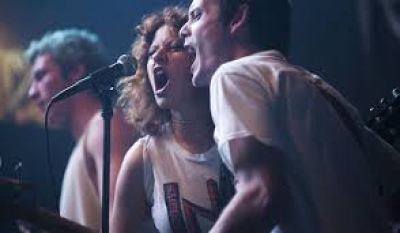 A small poor group of friends, Sam (Alia Shawkat), Pat (Anton Yelchin), Reece (Joe Cole) and Tiger (Callum Turner) are members of a small Punk Rock band traveling around the country in search of gigs. After landing a bad gig from their contact Tad (David W. Thompson) he decides to hook them up with his cousin Daniel (Mark Webber) for gig at a rough bar out in the country someplace between Neo-Nazi land and deliverance if you get my drift. Heck I wouldn’t be caught dead there. Well unless maybe I was dead. Yet for a fee of $350 for a short performance the band is on their way.

They arrive, perform and get paid but before they are able to leave they witness a stabbing. It seems a young girl, Emily (Taylor Tunes) was killed by an employee and her friend Amber (Imogen Poots) and now the band saw more than they should have in the Green Room. It seems there is a lot more going on at this location than meets the eye and the owner Darcy Banker (Patrick Stewart) must do whatever possible to keep the place up to code.

Held up in the Green Room the group of friends, Amber, dead Emily and one bad guy named Big Justin (Eric Edelstein) are behind locked doors. No way out but if the bad guys want in they could do so at any moment but they won’t. You see Darcy knows in order to keep his other secrets quiet he has to make the five kids look like they died in an accident, so he has a plan. Not all plans go the way you want them to whether good ones or bad so for a group of five against a group of killers some live some die. Guns, knives, box cutters, machetes, fighter dogs and fire extinguishers later the bloody battle begins and eventually ends and not the way one might think it would. Let’s just say it puts taking a ride out in the country and being in the wrong place at the wrong time a whole new take on fight for your lives because this battle is all out blood and gore with no holding back including the fighter dogs.

This story starts a bit slow and grainy for my taste and when it gets into the Punk music I thought it was over before it started but when the intense battle kicks in for survival this film had me on the edge of my seat. There are moments that I could not understand what the actors said but the actions here speak louder than words anyway. The story is basically shot most of the time in one location but this film doesn’t need anything else since when the violence begins you can’t think of anything else other than thank God that’s not me.

Overall a great little story told in a big bloody kick ass and intense way that keeps you glued to what happens next. Of course they depicted the dogs in a cliché way think the Michael Vick dogs but at least in the end they give you that kind of ah moment that softens your heart for a split second. It truly is not the dog’s fault but rather that of the owner, fact. What this movie misses out on in costumes, good music and scenery it makes up for in acting, intensity and just plain fear. The lead actors were all spot on with a few exceptions with some of the supporting characters but they were mainly short-lived anyway. Hands down Poots, Yelchin and Stewart take the lead with Shawkat coming up closely behind but ahead of the other characters. In the end they all fought hard and succeeded in making one hell of a film. After the first twenty minutes when they get past the setup that is! Thank God this never happened in any of the Green Rooms I’ve been in.

More in this category: « Mother's Day Captain America: Civil War »
back to top