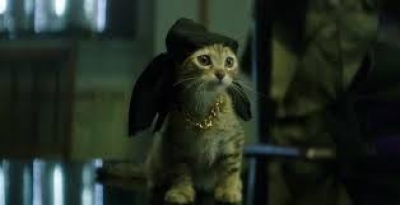 You think one would go to church to pray but as this film opens apparently the Allentown Boys (Jordan Peele & Keegan-Michael Key), I call them boys rather than the ‘N’ word used in the film, have entered to kill drug dealer King Diaz (Ian Casselberry). After a bloody battle takes place between the two groups a small kitten barely escapes for its life. A journey later through the streets of Los Angeles this kitten ends up on the doorstep of a broken heart. It happens to be the broken heart of Rell Williams (Jordan Peele) who just lost his girlfriend. Looking at it as a sign Rell takes in the kitty and names him “Keanu”.

Meanwhile Clarence Goobril (Keegan-Michael Key) is saying goodbye to his wife Hannah (Nia Long) and their daughter who are going on a weekend retreat with Spencer (Rob Huebel) and his daughter. Hannah hopes Clarence will loosen up and have a good time with his cousin Rell while she’s away. Later returning from a movie together Rell’s home is broken into and Keanu is missing. After an interrogation of their neighbor Hulka (Will Forte) who happens to deal in drugs they find out Keanu may have been taken to the HPV strip club which is run by Cheddar (Method Man) and his Blips, Trunk (Darrell Britt-Gibson), Bud (Jason Mitchell), Stitches (Jamar Malachi Neighbors) and Hi C (Tiffany Haddish). When Rell and Clarence decide to retrieve the kitty they find themselves in the middle of gangster land. Playing the part in order to bargain for Keanu they find themselves breaking laws, selling drugs, meeting celebrities, dancing to George Michael and even committing murder.

A long hard journey later the guys end up facing off to the real Allentown guys, coming to truth with Cheddar and the gang and ultimately meeting Bacon (Luis Guzman), family to the King. When Bacon recognizes the kitty that still happens to be caught up in the middle of everything the ultimate battle begins where only the truth will set you free, maybe many months later but it will happen even for kitty photogenic Keanu.

There are a number of twists and turns that I did not see coming but I must say I thought the story was more dramatically crime driven than that of comedy. It has its moments of course but very far and in between. I thought the director does a good job with the film and even the writing isn’t bad if you’re in a gangster film but as for funny they missed the mark. Even though the story line surrounds Keanu I personally felt the little kitty should have received more on screen time. I must say more than anything I did like the soundtrack especially the opening and closing dramatic score. Overall the film misses the mark as a laugh out loud comedy but it still tends to be entertaining in a gangster kind of way. How can one go absolutely wrong when everyone loves a cute little kitty? Overall the acting is not bad for the leads although with all the chemistry these two, Key and Peele, have it doesn’t show as strong in my opinion in this film. Since they are truly the main focus of the story line this doesn’t bode well for a long run in the theater. Although like the kitty in the film maybe “Keanu” will discover it has nine lives as well. If you’re going to have a cute little kitty in the film and promote it as a story surrounding this kitty at least make this kitty shine more on the big screen.

More in this category: « Papa Hemingway in Cuba Mother's Day »
back to top

We have 243 guests and no members online