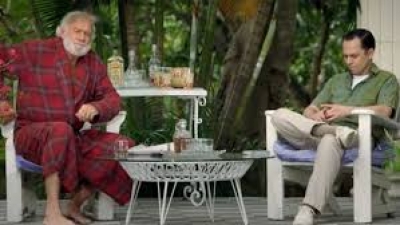 In Seattle, the year 1935 a small boy is left alone and stranded by his father. He later grew up in St. Anthony’s Orphanage with the writings of Hemingway (Adrian Sparks) in his hands as his only comfort and aspirations of one day meeting this author and writing as good as he does. This young boy grew up to become a writer at the Miami Goble in 1957. One day at work a young female associate, Debbie Hunt (Minka Kelly) who happens to be an admirer of that once young boy now grown man Ed Myers (Giovanni Ribisi) stumbles upon a letter he wrote to Ernest Hemmingway but never mailed. Well she took it upon herself to mail it; Hemingway received it and ended up calling Ed to join him on a fishing trip in Cuba.

What do you say to the man that changed your life and he never knew you? Thank you I guess may be a good start! Ed visits the Hemingway home and meets Mary (Joely Richardson) in a kind of embarrassing moment at the pool. The Hemingway’s never seemed to wear a swim suit but hey it’s their home and it is how God made them! As Ed and the Hemingway’s got to know each other Ernest offered to be Ed’s family, a joy he never understood in his life. Ed’s legend has now become the mentor and father figure he never had.

As Ed became more familiar with the Hemingway’s others became more familiar with Ed. John Fletcher (Anthony Molinari) from the FBI, Santo Trafficante (James Remar) leader of the Cuban Mafia, among others such as Hemingway’s closer friends, Evan Shipman (Shaun Toub), Sal (Frank Licari), Lucas (Rodrigo Obregon) to name a few. If you did not know Hemingway you would say he was a Nobel writer but if you did know him like Ed was discovering Ernest had a dark and depressive, mysterious side to him as well and the knowledge he held of President Hoover may hurt him more than help in a war torn area of the world.

Back home in Miami Ed and Debbie have grown closer but growing up alone and unfamiliar of the meaning of love and family their relationship was met with some turmoil especially since Ed was afraid of commitment.   It was not until Ed went back to Hemingway’s for his birthday celebration did he start to piece together the man’s true life story before and during the time he had fallen in love with him like a son to a father. In the end it was the lost bond now found, the love and friendship of the people that surround you and those very special three spoken words of I love you that bring Ed’s chapter to an end or in many cases to a beginning. On July 2, 1961 Ernest Hemingway died but the lives of many people that surrounded him including his adoring fans have lived on throughout his written words of wisdom. There is truth in the fact that sometimes the most troubled people in life are the smartest, hence Hemingway.

I did not know if I would like this film although I am a big fan of Ribisi but much to my surprise I loved it. The direction overall is superb and the writing phenomenal and although this story may not appeal to the average movie-goer I wish it would because not only was it educational but enchanting, intriguing and a bit mentally dark and mysterious. The back-drops of Cuba are amazing but the biggest wow factor was the life of this great writer Ernest ‘Papa’ Hemingway and the unknowns of his journey that come to life on the big screen.

There is a cameo of his granddaughter Mariel in the film but I did not recognize her so it might be interesting to see if you do. Otherwise the cast is brilliant with Ribisi and Sparks standing out as the leads. You really get to see quite a bit of both in the pool scenes but it is truly this nakedness within their love of this biography that propels the audience to stare at their every action. Kelly is gorgeous and I thought could have been utilized a bit more but for the part she plays she is good therapy for Ribisi’s character. Richardson is a bit crazy at times but I guess that was her character as the woman to always take a back seat to her husband’s life past and present. These are the main characters of the film but there are side stories within the supporting cast like that of Toub’s character that keep the story interesting beyond the life of Ernest. This is truly a great film that is worth the adventure if only for almost two hours into the life of Papa in Cuba.

More in this category: « The Huntsman: Winter's War Keanu »
back to top

We have 535 guests and no members online