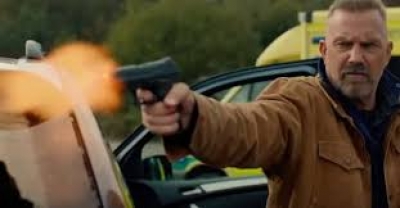 Three Paws out of Four

Criminal stars Ryan Reynolds as CIA agent Bill Pope who dies while traveling to meet Jan "The Dutchman" Stroop (Michael Pitt) as part of an agreement to give anarchist Stroop $10 million in exchange for a computer program that is capable of launching America's missiles at the touch of a button. Since the CIA is desperate to capture the hacker and recover the program, Quaker Wells (Gary Oldman) turns to Dr Franks (Tommy Lee Jones) who is experimenting on how to transfer memories from one brain to another. Jericho Stewart (Kevin Costner), a viciously violent death row inmate born devoid of any capacity for compassion, love or any other similar human emotions is chosen by Franks to receive Pope's memories.

However, when the procedure fails and Jericho is unable to recall the crucial information about the location of The Dutchman and the malevolent computer program, Wells orders Stewart killed. Naturally, Stewart manages a violent escape; and so begins the chase between Wells, Stewart and the Dutchman. However, as time passes, the procedure turns out to be a success after all -- Stewart realizes Pope's knowledge as well as his skills, and must race against time to stop the anarchists plans to wreak global havoc.

Stewart begins to have flashbacks of Pope’s memories that range from skills as a CIA spy to speaking French which this critic found to be quite comical. More significant to the plot however is that the procedure allows Stewart to feel emotions for the first time, and then suddenly Stewart remembers how to locate The Dutchman.

Criminal, despite its predictability, is a very entertaining movie with its comedy, suspense, thrilling chases and sentimental moments. Kevin Costner does an excellent job in this role, playing a violent sociopath turned CIA hero, and emotional and protective surrogate husband and father to Pope's widow (Gal Gadot) and their daughter (Lara Decaro).

More in this category: « The Jungle Book The Huntsman: Winter's War »
back to top