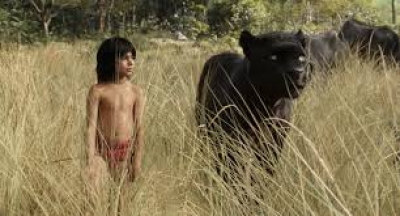 Mowgli (Neel Sethi) lives with the wolves but is not quite as good as them when it comes to certain aspects of the wild. He was brought to the jungle by the Black Panther named Bagheera (voice of Ben Kingsley) after his father was killed by a tiger known in the jungle as Shere Khan (voice of Idris Elba). Shere Khan wears the scars of the red flower on his face that Mowgli’s father marked him with before his last breathe. Bagheera left the boy with Raksha (voice of Lupita Nyong’o) and Akela (voice of Giancarlo Esposito) to be raised in the pack of wolves as their man cub.

As the boy matured he fit right in with the other species in the jungle and when the peace rock was revealed all animals came together under a truce to get along, except for one which came with a warning. Shere Khan made it known that once the peace rock is hidden by water once again, Mowgli shall be his for the taking and no one will stand in his way unless they wish to die as well. Mowgli decides to leave the jungle for the protection of the wolves and their cubs so Bagheera takes him towards the villages of man. When Shere Khan hears of the man cub being gone he kills Akela and runs after the scent of the boy. After a battle with Shere Khan and Bagheera breaks out, Mowgli is left in the jungle alone and embarks on a journey that leads him into new territories where some species may act as friends but are not. Kaa (voice of Scarlett Johansson) tries her best to manipulate Mowgli amongst other things but thankfully he is saved by Baloo (voice of Bill Murray).

A relationship is born or should I say arrangement between Baloo and Mowgli for honey and a song. Yet when Bagheera finds Mowgli Baloo is left with nothing but his bear necessity to show tough love. That is until the monkey’s attack capturing Mowgli and serving him to the King of the Jungle, Louie (voice of Christopher Walken) who wants to use Mowgli so that he can be just like him. Baloo and Bagheera try to come to Mowgli’s rescue but when he hears of the death of his only real known father, Akela, he returns back to the pack to seek revenge on Shere Khan with the red flower as his only weapon. When he decides to fight like a wolf it is Bagheera that tells him to fight Shere Khan like a man. In the end little wolf cub Gray (voice of Brighton Rose) gives out a yelping howl and the elephants of the jungle pay back a friendly deed.

I absolutely loved this film. I am and have been a big fan of the animated version but this film is so amazing in so many ways that it really stands out as remarkable. Favreau does a brilliant job here with only one complaint that I wish he and the writers brought in a little more humor. The story gets a bit dark and steady but I think if it kept up a little more action with a touch of levity it would have made the film perfect in my mind. The CGI and cinematography is breath-taking from start to finish. I was worried that talking animals might play out a bit awkward and silly but not at all actually quite the opposite since the images in 3D with a great background score stand out so brilliantly the voices only help you get more invested. Sethi is superb and you can’t help but fall in love with his child like behavior that evolves into a young man. I thought all the voices of all the characters even the supporting ones were spot on but if I had to point a slight fault I would have to say I was not sure about the voice of Baloo. I like Bill Murray but I just thought there were other voice actors out there that may have hit the mark with a little bit more of a roar. Other than that this film is beautiful to look at, intriguing to watch and a sure hit for part 2 to follow in the not too distant future. I loved every movement and behavior of all the animal characters and by adding a voice it only made me love them more in this wonderful Disney tale that may be a slight on the dark side for younger children.

More in this category: « Barbershop: The Next Cut Criminal »
back to top

We have 388 guests and no members online