Barbershop: The Next Cut Featured 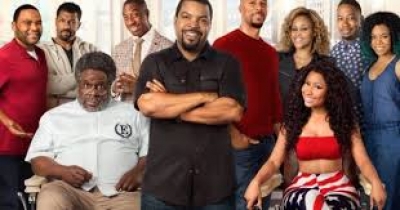 Barbershop: The Next Cut

Calvin (Ice Cube) after these entire years still has his barbershop, he’s married to Jennifer (Jazmin Lewis) and they share a handsome son, Jalen (Michael Rainey Jr.) who they love and protect with all their soul. Calvin now has a partner at the shop Angie (Regina Hall) who has stirred the pot and changed things up in the once all guys shop; now it is men and women. Eddie (Cedric the Entertainer) is still holding his own and working at the shop but has not slowed down with his antics and pranks on Calvin.

With the man cave no longer Calvin has a full house not only with customers but staff as well. Rashad (Common) works at the shop and is now partnered with Terri (Eve) and are raising Kenny (Diallo Thompson) his fifteen year son who hangs with Jalen in and out of school. Thanks to Draya (Nicki Minaj) and her promiscuity their happens to be many insecure moments between Rashad and Terri.

Calvin is constantly concerned for his family since living in the south side of Chicago violence and death are rampant on the streets and young misguided children of the community are falling into the hands of gangs. One reason why Calvin is considering with the help and guidance of One-Stop (J.B. Smoove) that moving his shop to the north would be a better place for Jalen to grow up and stay out of trouble. One issue in the south side is that the young learn from the old and the old, Marquis (Jamal Woodard) and Jay (Renell Gibbs) are still squaring off as gang members themselves. Not all kids in the south side grow up like their friend Anthony David (Anthony David) with a look to a bright and successful future. The future for their community could all change soon according to Jimmy (Sean Patrick Thomas) if the Mayor’s office gets approval for an enclosure project in their neighborhood.

It’s not until all the Barbershop members, Jerrod (Lamorne Morris), Raja (Utkarsh Ambudkar), Bree (Margot Bingham), Dante (Deon Cole) and others in and out of the community pull together to conduct a two day cease-fire does life in the south side stand a chance for change for the better. Hopefully in the end opening up the opportunity for a fresh start, learning from personal tragedy, leading to triumph, making the right decisions and never giving up for what is right.

I thought the film was very well directed and filled with a lot of timely and important dialogue that takes place within the Barbershop. It is this dialogue that at times left me feeling like an outsider to this story though. I attended this screening with my friend John who thanks to a deep conversation after the film gave me a slightly different perspective of this movie. It is truly targeted towards a certain demographic of which I am not and it also surrounds itself in making a change within the black community. I get this premise for a small film with a big message but I did feel that on a wider scale it would have been nice as a white person of color that we were represented in these topics of discussion and not as it seemed at times in a bad way. I personally was a bit disappointed that this film chose to disregard all opinions but rather held off on a smaller but by all means an important matter in our world today. It seemed the writers started down the road to a gay opinion or a take from a race other than African American but as soon as it started it ended! I do not judge people by the color of their skin or their religion or their sexual orientation but I will at all times judge them by their actions especially when these actions attack and harm anyone no matter in whatever community they may live in. If we truly don’t come together as one people then we stand nothing to look forward to in our future other than divided. It is understood that this story dealt with the inner life of a south side community in Chicago but as in this community and with this film if we don’t show love for all people than hate will continue to grow. The past is a memory and one to never forget but we all need to learn from it and move on in order to bring equality for all people in this world and I felt that this film was a poor representation of this hope. As for the music, editing, photography and acting it was all excellent with a few slight exceptions. The strongest of course coming from Ice Cube, Common, Hall and even though I am not a huge fan of Minaj she really does a nice job in this role as a trouble maker but hey is that really such a far stretch for her? The only animals in this film are the ones that used guns for power rather than words. Yet I’m not sure when the last time was I saw my cat walking around with a revolver in her paw! Huh I just finished my Chinese food and opened my fortune cookie. It says, the future is the most expensive luxury in the world, how ironic when you think about it!

More in this category: « The Boss The Jungle Book »
back to top

We have 447 guests and no members online