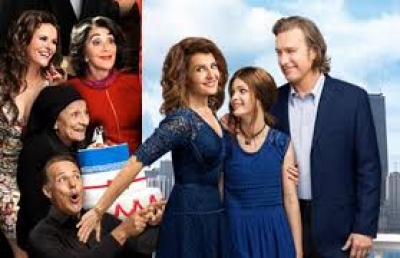 Toula Portokalos (Nia Vardalos) is the wife of Ian (John Corbett); they have a beautiful 17 year old daughter Paris (Elena Kamporis) and live right next door to all their relatives including her parents Gus (Michael Constantine) and Maria (Lainie Kazan). Toula works at the family restaurant, Dancing Zorba’s, as does her daughter on garlic bread night and Ian is Principal of Paris’s high school. Aunt Voula (Andrea Martin) of course lives close with her family, daughter Nikki (Gia Carides) a hairdresser and their son Angelo who shares a business with his partner in life and work. So when does the term out of a daughter’s mouth change from mommy to mother well that’s easy when they grow up and try to leave the nest. Paris is a senior and at the college fair is applying for college’s far away rather than the family favorite North Western University in Chicago. If Paris attends that school the family stays together and mother feels like she still has a chance at mommy. Nope!

Maria-Yiayia (Bess Meisler) is the great grandmother to Paris and although she appears to have one foot in the grave she tends to get around well, especially when you least expect it. A bit creepy at times but funny. One day while Gus was trying to learn how to work a computer as well as find out if he is related to Alexander the Great he stumbles upon his marriage certificate from 1963. A very touching and sentimental moment that is until he realizes it was never signed, meaning Gus and Maria are not legally married. They’ve been living in sin for all those years.

So as the story moves on we learn that Paris wants to move away from her smothering family. Toula and Ian don’t want her to leave nor does the rest of her huge family. Toula is so close all the time that Paris sees her own shadow as two people most of the time. Prom is right around the corner but Paris is not looking to attend that is until Bennett (Alex Wolff) comes into the scene in a very odd moment. Toula and Ian are trying to reignite their marriage and Gus and Maria are trying to plan a wedding that is until the wedding planner fires them leaving the Greek family to plan the blessed event.

Marriage is not for everyone and much to unpopular belief not all people need to be married but after 50 years of lying next to someone you may begin to miss there snoring when they’re not around. In the end and the way it should be you need to give your love all of you as they should give you all of them. In the end, family, neighbors and dog are all happy and life is as it should be whether near or far, Greek or not, gay or straight, young or old, single or married.

I tended to well up in the eyes a bit towards the end when some of this wonderful writing reminded me of my own Polish family and especially my mom and dad. So hats off to some wonderful, witty, sentimental and sometimes funny writing by Vardalos. Jones does a nice job as well with the direction helping to keep the story moving along. Some good music, dance, food and family and this film seems to have all bases covered and you don’t have to be Greek to understand or appreciate it. It’s a cute movie with a look through the front window on a big Greek family and the struggles but love they feel for each other.

Vardalos is enchanting and Corbett is a good support for her although tended to lag a bit at times. Constantine and Kazan are ideal and if they don’t make you reflect on your own parents no matter where you’re from in the world than you’ve missed out. Voula keeps the pace moving as does Fatone, Mandylor and the rest of the Greek family but it is Kampouris that appeals to the younger members of the audience. Meisler is a true treat and is the one character that will leave you laughing even without a spoken word. Overall a fun, cute, feels good kind of film that will appeal to everyone who decides to check it out in the theater or eventually on DVD. I am sure the Greek culture will love it. Opa!

More in this category: « Batman V Superman: Dawn of Justice Everybody Wants Some »
back to top

We have 317 guests and no members online