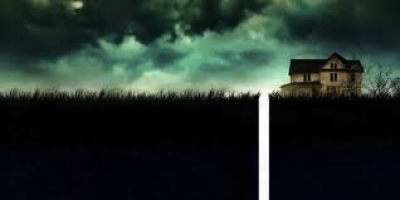 First off let me start off by saying this film is a distant cousin of the “Cloverfield” film years ago. There are no bad actors, no shaky camera movements and a much better story with the exception of a few holes. That said, a young woman, Michelle (Mary Elizabeth Winstead), has just left her fiancé and is driving away through the countryside 40 miles outside Lake Charles, Louisiana. The phone rings and it is Ben (voice of Bradley Cooper) her fiancé asking her to return home but before she can there is an accident where some time later she walks up in a cemented room handcuffed to a wall behind locked doors. Not knowing what happened, how she got there or what is to become of her she begins to panic. Howard (John Goodman) later appears explaining how he saved her life and that no matter how hard she tries to contact the outside world, no one is looking for her, and they are all gone.

Later she learns that they are not alone that there is another man in this bunker that Howard made under his house. Emmett (John Gallagher Jr.) is also in this bunker that resembles a small home filled with food, clean air, water, other necessities and of course Howard. Howard explains to Michelle that the outside world is dead due to a chemical or nuclear war. If you woke up tied to a wall in a basement bunker with two strange men wouldn’t you question the possibilities? Well Michelle has many issues with Howard’s story and many of the pieces to the puzzle are either missing or they don’t fit! Confessions later surface making Howard seem believable but as soon as Michelle and for that matter Emmett begin to believe him then another twist enters into the plot between three people in a small space making Howard less trustworthy leaving no choice but to try and escape.

There are regrets, apologies and confusion but they know being alive must mean something. As Howard slips into a possible option of trust or not especially when he brings Megan or Brittany into the story again the twist takes another turn. If you listen to his stories there are clues to what is actually going on outside the bunker. For one member sometimes saying your sorry is not enough but for another what is discovered outside is something this person never bargained for in her equation of life or death. Birds fly, crows sing and the sky is blue but that still doesn’t mean all is safe either. In the end choices must be made and the journey will continue for one whether on the road to Houston or Louisiana either way this is not the end. Yet!

I’m a big fan of stories like this so I actually enjoyed it. Amazing that three characters can keep you on a roller coaster ride for 90 minutes until in the end when the air clears the real culprit reveals itself. I thought the direction was well done resembling moments from such films as “Room”, “The Shining” and “Misery” to name a few but overall it still stands on its own thankfully to some exceptional writing that I felt had one or two holes. In the end the story and the actors in it still makes the film worth seeing in the theater at least on the big screen if not IMAX. It has a small budget which would explain most of the film being done underground in a confined space until some of the CGI and special effects step in. I liked the music that was played which if you listen to the words has a lot to do with the storyline. But it is the acting that pulls this together and thanks to Goodman he truly shines in this role making you constantly ask if he is mad or sane from beginning to end. Winstead holds her own here and works well in the set of the story but it is Gallagher as well as Goodman that helps her along her journey in this film. In the end, some may not like this story which leaves the ending open for more but actually I tended to find myself pulled in by these three characters in an unknown world that someday could be our own reality in real life!

More in this category: « Whiskey Tango Foxtrot Hello, My Name is Doris »
back to top

We have 613 guests and no members online