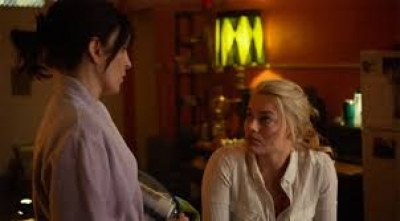 Paramount Pictures, Little Stranger and Broadway Video present an R rated, 112 minute, Drama, Comedy, War film, based on a true story and book “The Taliban Shuffle: Strange Days in Afghanistan and Pakistan” by Kim Baker directed by Glenn Ficarra, John Requa and screenplay by Robert Carlock with a theater release date of March 4, 2016.

The year is 2006 and on a military base in Kabul, Afghanistan Kim Baker (Tina Fey) is dancing and drinking with a group of military personnel that is until an explosion rocks the facility. Cut to three years earlier we the audience get invited into Kim’s life and how she ended up in a foreign country. She worked in New York City in the news department but more so a writer than anything else but when the boss came to her and a group of unmarried with no children co-workers asking for volunteers to report over in Afghanistan, after some heavy thought, Kim said she would go.

Now a war reporter, living in what is referred to as the fun house in a small dirty room with no shower and gun fire and screams heard all around her she realizes that she has entered the capital F capital W, the “Forgotten War”. At the Bagram Air Force Base Kim has her first lesson in proper sexual behavior from Colonel Hollanek (Billy Bob Thornton) but it’s not until she gets caught in a terrorist shoot out in the sands does she throw herself camera first straight in the line of fire initiating herself into the war on terror. While in Afghanistan Kim is assigned a cameraman, Tall Brian (Nicholas Braun) as well as a bodyguard Nic (Stephen Peacocke) and meets a new best friend Tanya Vanderpoel (Margot Robbie) a British female reporter who ranks 15 in Afghanistan to Kim’s number 9. Kim also meets a Scottish Journalist Iain Mackelpie (Martin Freeman) who happens to take a fancy to her and would be honored to shag her. All in time!

Based on this story life in Afghanistan is so foreign to American’s due to their religions, their laws, their cultural differences but in some ways there are similarities as well. As time passes and Kim becomes more accustomed to the new world she lives and works in she witness’s tragedy, comedy, love and pain. She makes new friends like Attorney General of the Islam Republic of Afghanistan Ali Massoud Sadiq (Alfred Molina) who has more on his mind than politics and interviews when it comes to Kim. At the time Kim was taken and dating Chris (Josh Charles) back in New York City but when the world became more about Chris than Kim she left him for all the right reasons later giving way for the shag session between her and Iain.

Lots of partying, booze and sex even between the animals, dogs mostly, Kim has really come into her own but when she puts herself above others in her company for a story risking lives, her guide Fahim Ahmadzai (Christopher Abbott) decides to leave her side. It’s been said that war is like sex with a gorilla you keep giving until the gorilla wants to stop and not before. It’s now 2006 and Kim flies to meet with her new boss Geri Taub (Cherry Jones) who happens to want to pull the plug on Kim. Some may think American blood is thicker than British blood and in the case of Kim versus Tanya, probably so! Yet it’s not until Iain goes missing does Kim enter back into Afghanistan in hopes of pulling some favors to help rescue Iain from his assailants. One rescue later, great film footage and some self-reflection has lead Kim to her next assignment where one writer has now become known on camera worldwide. No one has control of good or bad in life but we do have no choice but to move on.

I really thought this film was supposed to be a comedy but I found it very far from that. Grant it the story has its comedic moments but overall this is a real life war drama that takes the average uninformed movie goer into the life of a news correspondent covering life in a foreign war torn country known to many Americans as the terrorist region of Afghanistan. Brilliant writing and some phenomenal direction with superb cinematography makes this a must see movie about the men that are out protecting our country and the reporters that are out to inform us of them doing their jobs. Fey is a phenomenal comedy actress but she really steps outside her box here and preforms the Baker character brilliantly. Even though she is surrounded by so many other actors like Thornton, Robbie, Freeman, Abbott, and so many other supporting and extra roles it is her that controls this story and leads the movie audience on a journey through the “Forgotten War” and the effects it has on life then, now and into the future.

More in this category: « London Has Fallen 10 Cloverfield Lane »
back to top

We have 740 guests and no members online