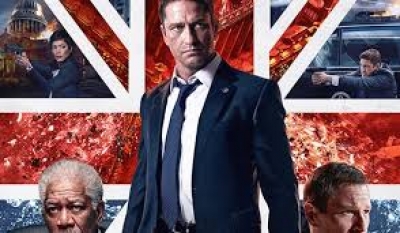 It’s the wedding day of Aamir Barkawi’s (Alon Aboutboul) daughter and a celebration is taking place about 50 miles outside of Pakistan. Barkawi is an evil Middle Eastern man that is supplying weapons of mass destruction to the terrorists of the world. His son Kamran (Waleed Zuaiter) has informed him of some latest news about their future plans and not to soon thereafter by the touch of a finger from the Creech Air Force Base in Nevada the celebration has turned into travesty for the Barkawi family.

Two years later in D.C. Mike Banning (Gerard Butler) is out jogging with President Benjamin Asher (Aaron Eckhart) but at home for Banning his wife Leah (Radha Mitchell) is expecting their first born. When Banning returns home that night he begins to type out his resignation but before sending it he hears of the sudden death of the British Prime Minister. Soon after in a private meeting with Secret Service Agent Lynne Jacobs (Angela Bassett) both Banning and President Asher decide they must fly to London for the funeral. Banning knows something does not seem right but he and his team along with Jacobs and the President are on Air Force One headed to London.

On the day of the funeral leaders from many countries, the German Chancellor, the Japanese Prime Minister, the Italian Prime Minister, the Canadian President and several others have gathered throughout London from the Buckingham Palace to the Westminster Abbey to take in some sights before making their way to St. Paul’s Cathedral for the funeral but in horrific terrorists attacks many of the leaders are killed along with hundreds maybe thousands of civilians. As for the President of the United States, after a brutal shootout and car chase along with an attempt at air escape he and Banning are on the run for their lives and even Vice President Alan Trumball (Morgan Freeman) can’t seem to help.

The terrorists in a revenge attack make a statement that this is the day when the world will change forever. Their current attempt is to track down the President like a dog and brutally murder him at 8 PM on camera in front of the entire world. It is up to Banning to protect him from the enemy but even his MI-6 Agent in London Jacquelin Marshall (Charlotte Riley) can’t help since they realize that there is a mole in their secret service system. In an explosive ending to a long and treacherous rescue mission there ends up to be fire in the hole, many funerals to attend and through it all new life to celebrate. God Bless everyone and the United States of America. I know it’s only a movie but in this year of new elections we surely need all the blessings we can receive.

As a sequel to “Olympus Has Fallen” I thought they did a great job with this story. Grant it the writing is mostly predictable with a few twists and turns but it seems to be a much better action film than the first installment. Nicely directed with many moments that stood out to me like I just entered a crazy explosive terrorist video game the film keeps you intrigued with all the special effects and the plans of attack on the world’s major heads of states. A nice score to help ramp up the tension and some brutal military action keep this story in a high octane mode from start to finish. At times it seems hard to fathom that throughout it all there hasn’t been more collateral damage but then again the cameras focused more on the main players and the CGI rather than the civilians on the streets. Yet overall this film should do well even after word of mouth since it actually is an exciting and somewhat possible scenario of life in this day and age of so many hateful people.

Butler once again hits the mark as an official bad ass actor in Hollywood who can grab the attention of everyone that watches him kick ass on the big screen. Eckhart is the fall guy to Butler’s character but he truly does a nice job in keeping up with him in the acting and action departments. Bassett is a joy to watch even though her role is small and as for Freeman well what can one say other than he can sit there and have one line and we still would praise his performance and voice. Bad guys Aboutboul and Zuaiter along with all their terrorists are wonderful on the big screen making us all want them dead before the story ends. There are so many extras and supporting roles which help to propel this film to a must see so albeit in the end beyond its predictability, somewhat little character development and it’s shaky camera movements like that from a video game this film is over ninety minutes of pure heart pounding action and well worth that bucket of popcorn and a drink too.

More in this category: « Zootopia Whiskey Tango Foxtrot »
back to top