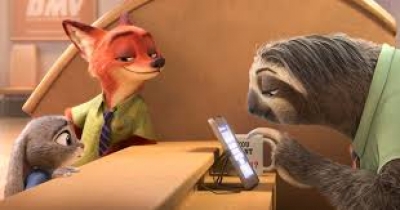 Review Written by Jon Patch with 3.5 out of 4 paws

Vicious predators versus meek prey in the town of Bunny Borrow, well not any longer, for the better part of life other than your typical bullies all species of animals get along even though some animals like Bonnie Hopps (voice of Bonnie Hunt) and her husband Stu (voice of Don Lake) tend to have some hidden agendas when it comes to the fox family. In a world full of 90 percent prey versus 10 percent predator the world and all the species in it seem to get along just fine, for now! The kids at a local play inform the audience they aspire to grow up to be an astronaut or a businessman but for little Judy Hopps (voice of Ginnifer Goodwin) she wants to move to Zootopia where anyone can be anything and she wants to be the city’s first bunny cop.

Fifteen years later Judy does just that, she moves to Zootopia attends the police academy and becomes a cop, not an easy task for a little bunny up against rhinos, lions, elephants and larger species but graduating as valedictorian she makes it as the very first of her species to wear a badge. First assignment meter maid even though she wants part in a huge investigation she is looked down on by Chief Bogo (voice of Idris Elba) and given an important but less risky assignment, ticketing violators. Yet one day while writing tickets she notices a misplaced fox named Nick Wilde (voice of Jason Bateman) looking to buy a huge freeze pop at the elephant’s ice cream shop. Nick is buying it for his child so she thinks no motives and all is a misunderstanding or is it?

Later on at the police station Clawhauser (voice of Nate Torrence) is having trouble detaining Mrs. Otterton (voice of Octavia Spencer) who wants to see Chief Bogo. It seems her husband has gone missing and she needs help to find him. Against the Chiefs permission Judy volunteers for the mission and with the help of Assistant Mayor Bellwether (voice of Jenny Slate) Judy gets the job. The Chief though makes a deal with Judy that if she can solve the disappearance of Mr. Otterton as well as thirteen other predators that have disappeared Judy can keep her job as a police bunny.

The search is on for Judy to find the missing predators specifically Mr. Otterton and along the way she blackmails Nick Wilde to help her on the streets and within the different sections of wilderness inside Zootopia. As they find clues along the journey danger lurks at every turn as they discover that for some unknown reason the predators have gone savage and Mayor Lionheart (voice of J.K. Simmons) may be hiding something. Judy and Nick are fast on the trail turning over every stone to find some answers. Visiting the Naturalist Club, to the DMV and ending up in the presence of Mr. Big (voice of Maurice LaMarche) Judy and Nick are finding that pay it forward is a big help even in a little world. It’s not until Judy and Nick trace the path to the timber wolves, known as night howlers, does some clues surface bringing a close to the case or does it? Not all things may seem as they appear and some facts may be misunderstood yet for Judy she has finally come to realize that in order to make the world a better place overall then what everyone needs to do is just try. Next stop a new partner and a new case that may have you moving fast in a slow world.

I have to say I really enjoyed this film but it is a very much an adult at times heavy story that may be a bit hard for the younger audience to follow. It is very well written but more so I think for the parents rather than the children. There are a lot of fascinating things to look at along with some very scary and dark moments that will have the kids jumping out of their seats but as long as the parents don’t look to heavily into the writing and make more out of it than there is, like a good message, than all will be fine. Bottom line in the final scene of the film the premise here is to make the world a better place for everyone no matter what species, predator or prey you might be. I liked the direction of the film along with the cast of actors used for an array of animal characters which left the audience laughing in some moments, intrigued in others, over-thinking it in some parts but overall I think hopefully getting the right message out of the plot. No humans only animals acting like humans, in the real world thank God they don’t because their probably the only normal ones left on this planet. Am I over-thinking it? Maybe! Maybe not!

More in this category: « Remember London Has Fallen »
back to top

We have 314 guests and no members online