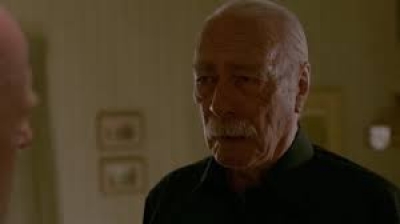 Where’s my wife? That is a question constantly asked by Zev Gutman (Christopher Plummer) whose wife Ruth died of cancer. Zev whose first name in Hebrew stands for “wolf” lives in a senior home and suffers from dementia. His closest friend is Max Rosenbaum (Martin Landau) bound to a wheel chair he reminds Zev that upon the death of Ruth Zev promised to carry out a deed on behalf of both men. Max and Zev knew each other from the war when the Nazi’s killed entire Jewish families.   Zev at the age of 88 some 70 years since the war is handed a letter and money from Max mapping out in detail a journey for Zev to find Rudy Kurlander (Jurgen Prochnow) the prison block guard from Auschwitz.

Zev leaves in the middle of the night eventually taking a train to Cleveland in hopes of locating Rudy but his first stop is at a local gun shop. He travels with the clothes on his back but thanks to Max his accommodations are all pre-arranged leaving less stress on Zev’s journey. He encounters several men along his path from Cleveland to Canada to Idaho some German but not the person he seeks, one also with a tattoo like Zev’s 98814 on his arm but he was tortured not for being a Jew but rather a homosexual.

It is not until Zev arrives at John Kurlander’s (Dean Norris) home, a local state trooper, does this journey take a horrific turn for Zev, John and his German Shepherd Eva, a name quite popular amongst the breed. What started as a friendly encounter did not end the same way and John’s father was not the man Zev was searching for. Based on the old house John lived in and the memorabilia throughout the home from the war in the late 1930’s it goes to show that the leaf sometimes does not fall far from the tree. Shortly after this encounter Zev ends up in Reno, Nevada and later in Tahoe where he finally meets the man with a strange face but the voice which never changed, Rudy Kurlander. What happen in this beautiful Tahoe home up in the woods will be something that you will “Remember” and the reason why you’ll never forget.

The film moves very slowly but I must say it is very intriguing. At 95 minutes if they sped up Plummer’s walk then the story would have been too short but if they added some flashbacks it would have gave the story a chance at a younger audience besides the AARP group that this film caters to. Still though for a simply laid out story line with some wonderful twists this film is very well directed and written with a nice score and a look at what once was in time past we pray never happens again. There was a lot of torture for these men not only in their youth but carried with them throughout their entire life.

Plummer is mesmerizing and worthy for attention come Oscar season. Landau, although a man in the foreground he helps develop the story and keep it and Plummer’s character on the move. Norris always seems to play the same type of character as he does in the hit television summer program “Under the Dome” but if it works which it does why fix what’s not broken. There are several actors that play Rudy Kurlander but it is Prochnow that stands out in the end revealing the entire truth from so many years in the past, literally. There are a number of supporting roles that add to the plot enhancing the story from beginning to end but it is the meaning behind this story that will forever echo the lining of one’s heart and soul.

More in this category: « Gods of Egypt Zootopia »
back to top