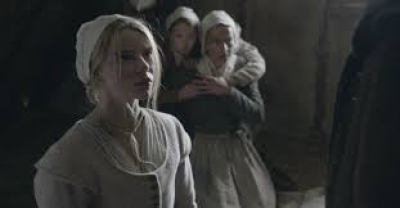 A family in the 1630’s New England is banished from their plantation by the community. They set off for a life in the wilderness, father William (Ralph Ineson), mother Katherine (Kate Dickie) and their five Christian children, Thomasin (Anya Taylor-Joy) the oldest daughter, Caleb (Harvey Scrimshaw) the oldest son, the twins Jonas (Lucas Dawson) and Mercy (Ellie Grainger) and infant Sam. Sometime later as they settled, building a home, barn, planting crops and tending to several goats, a dog and horse, life just seemed to be moving along well.

One afternoon when Thomasin takes baby Sam for a walk in the fields outside the edge of the woods he suddenly goes missing. Afraid to enter the woods alone Thomasin returns home with the news of Sam’s disappearance. The family speculates that a possible wolf may have grabbed the child. William and Caleb with the family dog enter the woods checking traps and hoping that maybe they would discover the whereabouts of Sam but nothing turns up not even food well besides some strange rabbit which did nothing but help create an accident. The children have been warned by their parents to stay out of the woods in fear that they too may go missing.

Katherine is hysterical due to the loss of her baby, William is fearful that they will have no food since their crop has died, Thomasin is developing into a woman as her brother Caleb has noticed, strange right, and the twins well they are just obnoxious. With fear of the winter upon the family and not being able to survive without food Caleb and Thomasin and their one horse and dog enter the woods with a gun in hopes of finding food but what happens during their hunt causes only more concern for the remaining family members. Evil lurks in the woods and now the family fears it to be a witch and some worry that it may have taken the form of Thomasin. Fears multiply and fingers are pointed especially after what happens to Caleb which only causes Katherine to want to return to England. Yet during that evening, their last evening, hell has entered into their lives releasing Black Phillip (Wahab Chaudhry) and “The Witch” (Bathsheba Garnett) and by morning, life for Thomasin will never be the same.

The film is based on folklore and myths from the days gone by of witches and evil. I found that the story is directed well with a nice backdrop in the woods that adds intrigue to the film. The writing is also well done but has a few holes some obvious and some not so much. The score is probably some of the best which makes you tense only to have an unsatisfying reaction to the results. The film is not very scary but is truly disturbing in so many ways.

The cast is well chosen and developed for the most part but the accents on the characters made it very difficult to understand exactly what they were saying which made it hard to follow the storyline which made me feel like I was missing some important dialogue. Taylor-Joy was brilliant in the film along with Scrimshaw, both of their careers I can definitely see taking off due to their acting here. I mean I can’t say anything bad about any of the main actors, Ineson was great, Dickie was frightening at times and like I said Grainger and Dawson obnoxious which was perfect for the roles they were playing. So overall this film will gross you out a bit, even disturb you before it scares you and if it wasn’t for the dialect and few holes I would have enjoyed this film more than I did. Oh well, now it’s time to pray.

More in this category: « Deadpool Eddie the Eagle »
back to top