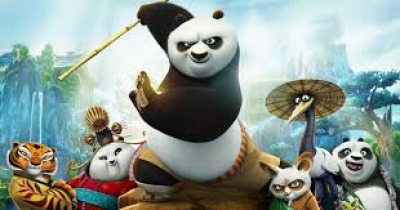 When Master Oogway (voice of Randall Duk Kim) comes into contact with old friend now rival Kai (voice of J.K. Simmons) in the spirit realm he learns of Kai’s evil plan. Kai wants to not only take the Chi, energy that flows through all living things, from Oogway which would increase his energy and powers but travel back to the real world and take the Chi from all the Masters including the Dragon Warrior Po (voice of Jack Black). Luckily Po has his friends to help and protect everyone, Tigress (voice of Angelina Jolie), Shifu (voice of Dustin Hoffman), Monkey (voice of Jackie Chan), Mantis (voice of Seth Rogen), Viper (voice of Lucy Liu) and Crane (voice of David Cross). Oh and not to forget his father the goose, Mr. Ping (voice of James Hong) creator of great Chinese dumplings and noodles.

One day in town a strange visitor arrives looking for Po his name is Li (voice of Bryan Cranston) who happens to be Po’s long lost father. He reunites with his son with a message that in the hidden mountains there is a secret panda village and he wants his son to travel there with him. Po thought he was the last of his kind so he makes the journey, not with one but his two fathers. An old proverb states, if you never do more than you can do you will never be more than you are now, a very smart comment from a wise little creature! When Po arrives at the village he is met by many other panda’s young and old, big and small. Time passes and Po learns many traits from his father and the other panda’s even the truth behind his childhood and his mother. Everything is wonderful that is until Kai arrives into the real world and starts to capture all the Masters and their Chi. One final stop though for Kai is to take the Chi from Po and kill the entire panda village. This leaves Po with no choice but to try and teach everyone the art of Kung Fu.

Po learns the meaning of sometimes doing the wrong thing for the right reasons while also discovering who he truly is and why he has one quest in life and that is to save the world. In a final battle from the real world to the spirit realm Po is left with one big decision whether to stay or go back to a normal life. The question is whether life will ever be normal once again for Po?

The film is nicely directed and written with a great cast of characters and voices of course. Wonderful animation which contains some truly astounding moments especially in the facial expressions and movements that the characters project and bring to life are some of the best features in this smartly produced 3D story. At times I thought there were a few lull moments but not enough to argue about since most of the time the film moves well thanks also to a wonderful score and beautiful animation. Grant it with some of the new characters especially in the panda world the writers could have added a bit more laughs. There is one panda that may offend but people need to lighten up it’s an animated film out to make people laugh with no underlying reason to insult. Either way I think it’s a fun film for the entire family that probably won’t do as well as some of the other recent animated films but even so it’s worth the ticket price for a day out to the movies with the kids.

More in this category: « The Finest Hour Pride and Prejudice and Zombies »
back to top

We have 219 guests and no members online