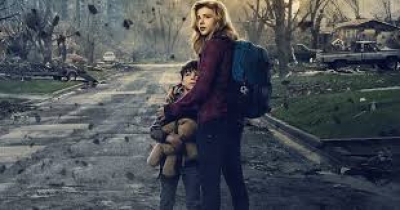 Review written by Jon Patch with 1.5 out 4 Paws

Cassie Sullivan (Chloe Grace Moretz) was your typical normal high school girl with a crush on Ben ‘Zombie’ Parish (Nick Robinson). She lives with her parents, mother, Lisa (Maggie Siff) and father, Oliver (Ron Livingston) along with her little brother Sam (Zackary Arthur) in a nice home in Ohio. Suddenly one day at school was her last normal day for the rest of her life after the news channels report a strange object hovering over her city. At first nothing happened while this object appeared but soon all the power in the city went dead. Everything humans took for granted was gone this was the first wave from the “Others” as they called the strangers from beyond earth.

Cassie and her family fled to the mountains thinking the city would be a more dangerous place to be that is until the second wave hit, earthquakes and floods hit the entire world. Many lives were lost but it was the third wave that really caused mass casualties. It is said for every one human on earth there are seventy five birds and when these creatures started to carry a virus it spread to the remaining humans killing off most although some for some reason were immune. Cassie lost her mother but she, her father and Sam left town to seek out a refuge in the mountains but when they arrived what they later found was even more of a mystery. The military led by Colonel Vosch (Lieb Schrieber) came to the refuge to round up the young and take them to Wright Paterson Air Force Base. In the middle of the move Cassie got separated from Sam and on the fourth wave the Others were on the ground and Sergeant Reznik (Maria Bello) and her comrades trained the young humans to fight. Ben along with Ringer (Maika Monroe), Teacup (Talitha Bateman), Oompa (Cade Canon Ball), Flintstone (Alex MacNicoll) and many other children were sent out into the local towns to kill. Once in the field they began to question their directions and purpose realizing that they were not rescued but actually drafted.

The only way to kill the Others was to kill the host and the host was human so it became difficult for Cassie to determine an Other from a human in her quest to reach Sam at the military base. By herself traveling countryside she gets shot but later is saved from death by Evan Walker (Alex Roe) but Cassie questions if he is truly friend or Other. Of course what would be an alien film without a love interest enter Evan Walker, yes handsome, built and a bit super-human.

In the final wave it became a full out invasion and the truth becomes revealed leaving Cassie and the rest of the survivors questioning love, choices and the two sides of hope, weakness or strength. I guess in the end it is hope that makes us human.

The film is a slight level above a made for television movie or a mini-series for the Sci-Fi channel. There are so many holes in the story, characters come and go, no character development and just a cliché simple plot with rough development from beginning to end. The direction is even off and apparently they over-looked a few bloopers along the way but I guess they may have said hey we are over-budget so leave them in! Not a quote just my thoughts! The whole film needed to be tightened up in the direction, writing and editing categories. Grant it some of the special effects were good but some not so good but in the end there wasn’t enough to help this film heck where were the creepy aliens they called the Others? I guess that’s for part two! I can’t imagine there would be one but hey who knows maybe the young audience will take to this although I can’t imagine that either.

Moretz actually does a nice job with her role as best as she can, make-up and all! Robinson can slide by as well but he can’t compare to Roe who steals every moment he is on screen. Siff is short lived and as for Livingston well this role was a bit of a shot in the dark I guess and as for Arthur well he’s cute and played that well. Bello is way over-done but thankfully Schrieber throughout a weakly written and directed film saves the day with his character which like all the others is under-developed. The film has a big cast and some good names but it really under-performs overall. Too bad because the concept although done before was at least interesting and did not make me want to walk out. There may be hope after all or is this thought out of weakness or strength? One of my favorite parts was the song “Alive” by the artist Sia. Oh wait that was the end of the movie during the credits! I’d say wait for DVD and experience it for yourself!

More in this category: « Norm of the North The Finest Hour »
back to top