Norm of the North Featured 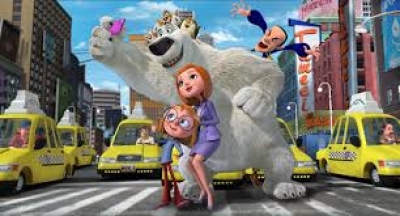 Norm of the North

Norm (voice of Rob Schneider) is a polar bear in the Arctic; his Grandpa (voice of Colm Meaney) has gone missing so Norm’s father (voice of Dan Gordon) is King of the territory. Reindeer, seals, polar bears, orca’s and lots of lemmings roam the arctic region, a vast frozen world that in the circle of things supports life everywhere. For some reason like his Grandpa Norm can speak to humans but has never revealed this fact since he never felt he had too. That is until a model home shows up in their environment and with one home the fear is that many others will follow. He witnesses a man named Nigel (voice of Dan Gordon) shooting a commercial with a fake polar bear for a company known as Greene Homes run by Mr. Greene (voice of Ken Jeong). Shortly thereafter a helicopter flies in with the arrival of the head of marketing for Greene’s company, Vera (voice of Heather Graham) and at this point Norm against his father’s wishes knows he has to step in to prevent these homes from ever being developed.

Sometime later Norm realizes that he must make a difference on his own with no help from the others except for his three lemming friends. Everyone else believes that humans won’t destroy what they love! Right? Wrong! So when Greene Homes flies back the demo home to New York City Norm and his three friends hitch a ride. Greene needs a new fresh idea to get the development approved by Councilwoman Klubeck (voice of Salome Jens) to move forward with his investors and the project so he and Vera begin to interview polar bear actors for a new commercial but when they hire Norm and his three lemmings little did they know they were getting the real deal and much less a bear out to make a difference. He needed help though and Norm found it in a little girl, Vera’s daughter Olympia (voice of Maya Kay) she knew from the start that Norm was a real bear and that he was out to save his land from human encroachment.

So under some advice from his seagull friend Socrates (voice of Bill Nighy) and that of his grandpa, Norm is determined and focused on saving the Arctic from humans, not as tourists but definitely as neighbors. In a Titanic moment, Norm knows what it feels like to be king surrounded by friends and family while out to save the Arctic in turn save the world.

The film is definitely the right length of time, any longer and it would have totally lost focus. The direction is done well with a simple story line that at times if you pay attention pokes fun at Florida and a certain theme park, almost going a bit too far with one comment. Well for some if taken out of the text of humor and an animated family film that one liner between a whale and a seal may be crossing the line slightly but hey it’s a movie right? I’ll leave that one up for your thoughts! The animation is not close to Pixar at all but is certainly done well for a newer company like Splash! Most people won’t pay attention to footprints in the snow or shadows from the characters. Actually like the Minions of Despicable Me films this one has the lemmings and they work so well for this film that they literally save this story. I actually was not even aware of a lemming which is a small short-tailed furry-footed rodent native to the northern regions of North America, Europe and Asia. Overall it’s a fun film with some good voice work that will get a few laughs out of the adults in the audience but I’m sure the kids will enjoy it more. Filled with several cliché moments, poking fun at other films and that of stealing a few unoriginal ideas this film is still cute enough for a day out at the theater with the family.

More in this category: « 13 Hours: The Secret Soldiers of Benghazi The 5th Wave »
back to top