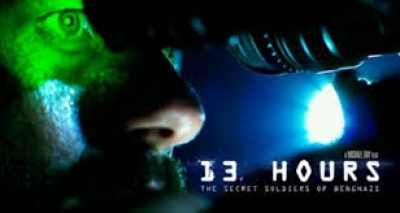 13 Hours: The Secret Soldiers of Benghazi

In 2012 there were said to be 294 Diplomatic outposts throughout the world and two of the most dangerous ones happen to be in Tripoli and Benghazi. Based on a true story this film evolves mainly around the one outpost in Benghazi that most people are aware of from the news involving the Obama administration and Hillary Clinton as Secretary of State and the knowledge or lack thereof in protecting this outpost when attacked by Libyan rebels. Did most people know there was a secret CIA base just one mile down the road located right next to a Libyan slaughter house? Well according to this story there was a base run by Chief Bob (David Costabile) and a fairly large staff including Sona Jillani (Alexia Barlier) along with six expert military contractors, Dave ‘Boon’ Benton (David Denman), Jack Silva (John Krasinski), Tyrone ‘Rone’ Woods (James Badge Dale), John ‘Tig’ Tiegen (Dominic Fumusa), Kris ‘Tanto’ Paronto (Pablo Schreiber) and Mark ‘Oz’ Geist (Max Martini). There main focus was to keep an eye on the overtaken government in this part of the country and the possibility of weapons landing in the wrong hands by way of the black market.

When the CIA base learns of Ambassador Chris Stevens (Matt Letscher) coming to Benghazi for a visit to the nine acre outpost on September 9, 2012 the six men are asked to run a security check on the base, finding out that it was really not that secure. Back at the CIA base we get to learn quite a bit about the guy’s private lives, their wives, their children and even their pets. They expected to return home in about two weeks to their lives in the United States but when the outpost becomes under attack putting the lives of the Ambassador and his current staff in jeopardy and with no outside help from the United States government these six men took matters in their own hands trying to save American and innocent lives. It’s amazing how this film to me in many ways depicts modern technology and how it is used to help and also hurt mankind. Used with hatred guns and cell phones alone can do a lot of damage and take lives.

The U.S. government did not want to expose the CIA base but in a matter of a short time and lives at risk the people faced in the path of their possible deaths had no choice but to fight on their own. Lives were saved and lives were lost in a brutal battle between our men and the Libyan rebels. Ironically it seemed that all of Libya knew what was going on except for the American government but with help so far away our soldiers had no option but to fight for survival. Leaving some men to die in a place they did not want to be. In the end I liked the fact that one man called his wife expressing his fears and emotions making this film even more emotionally real for the audience. Americans grieved for their dead as did the Libyan people but in the end throughout all this hatred, anger and greed we still continue to fight each other. For what? Power! In the end it is true that all people are not bad so we should not judge everyone based on their beliefs or culture for the horrific acts performed by others in their community. Not all people are bad? Are they?

I loved this story and not for the death of innocent people but for the way it depicts the ideals of a culture and the beliefs of people within those different environments. Based on truth I tried to understand why and how people can be so horrifically cruel to take lives in a blink of an eye and for what? Do they even know, many of them what they are even fighting for? Apparently this film brought out anger and emotions in me of which I know it will with you as well leaving you to search inside your own soul how you really feel about the power of hatred in a world gone wrong. There is some mixed humor written within the story line but it works were its placed. The direction is perfection, the special effects heart wrenching and the acting stands alone by all the characters but mainly of course the six soldiers that we become familiar with as our fathers, our brothers, our friends, our protectors. If I have to say in terms of performance which man was the best I could not since like a group of military men they all supported each other equally.

More in this category: « The Revenant Norm of the North »
back to top