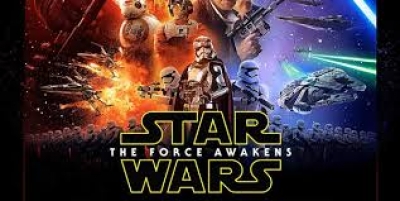 A long time ago in a galaxy far away, the force awakens to episode VII. Everyone is looking for Luke Skywalker (Mark Hamill) the last surviving Jedi. The Resistance led by General Leia (Carrie Fisher), new hairdo by the way, needs him and the First Order led by Supreme Leader Snoke (Andy Serkis) and shadowed by General Hux (Domhnall Gleeson) with Kylo Ren (Adam Driver) want him dead.

When the storm troopers raid a village after hearing of the knowledge of where to find Luke Skywalker many are killed, Poe Dameron (Oscar Isaac) a top pilot with the Resistance is captured and BB-8 who holds a map is on the run. Sometime later the droid meets up with Rey (Daisy Ridley) while on the planet Jukku and both become friends. One of the Storm Troopers has gone AWOL from the First Order and after escaping their ship with a passenger has landed on Jukku where Finn (John Boyega) meets Rey. Once the First Order hears of the importance of BB-8 and the secret it holds they will stop at nothing to get him. So Finn, Rey and BB-8, now new friends are all on the run aboard a stolen old ship known as the Millennium Falcon in hopes of reaching the Resistance before the First Order reaches them. Yet when the Falcon loses power in space it is its rightful owner who boards it, Han Solo (Harrison Ford) and his right arm Chewbacca (Peter Mayhew).

You see Luke was the last Jedi but he was training new children with the potential to become Jedi warriors and before that would happen Supreme Leader Snoke wants him dead. There are many secrets held amongst the new group of Resistance fighters, Rey has visions of the past that soon explain many new occurrences, Finn I believe holds more than just a friendship for Rey, Hans and Leia miss the past the mistakes that were made and hope that one day they can be reversed and BB-8 well that droid is just plain awesome. After a stop at Maz Kanata’s (Lupita Nyong’o) place everything gets stirred up once again and this time Rey after coming in contact with Luke’s saber becomes captured by the dark force where she for the first time is faced with his powers. Finn cannot live with himself knowing that Rey is in the hands of the First Order and Han Solo and Leia know that the Order is going to destroy mankind first starting with the Republic, so Solo, Finn and Chewbacca fly to their planet in hopes of saving Rey and destroying their powers.

From this moment on in the film I’d rather not say much more other than all secrets, motives, revenge, lies, and truths are revealed and for what you expect to happen may just be the unexpected. Yet unlike Iraq in the real world the First Order truly does have weapons of mass destruction. I only wish the power from the dark side stayed dark and did not reveal his identity since I think it made him as an actor more vulnerable to critics likes and unlike comments, like myself who preferred him as a mystery. In those final words spoken so true and so iconic yet this time revolving around girl power, “may the force be with you”.

Just a bit over two hours this was one film I wished continued on longer but as the ending so vastly suggests there will be more and rightfully so. The direction is superb and the writing excellent, outlining the plot, developing the characters old and new and just overall keeping it simple and understandable with enough twists and turns to keep it intriguing. The editing, the costumes and the special effects, CGI is awesome along with of course a perfect score. I don’t believe this episode VII will disappoint the old but will truly entice the young generation making many new fans to keep Star Wars going for a very long time.

Ford is just plain fantastic and even though his face as aged his character is timeless. Fisher does not have a huge roll nor does Hamill but both are a thrill to see once again so many years later. I loved the way the writers worked the old crew into this story. Ridley is brilliant and a perfect female lead to carry this franchise forward. I was enthralled with Boyega who at first I may have thought he was over doing it but as time goes on he brings both humor and drama to his character and the role he plays opposite Ridley’s. Isaac carries himself well and even though covered in fur Mayhew is impressive. Gleeson for me is on the fence as is one of the main characters played by Driver. I thought Gleeson showed stronger, meaner traits then Driver. Nice to see R2-D2 (Kenny Baker) and C-3PO (Anthony Daniels) back in action but I really did become a huge fan of BB-8 who for being a round metal ball displays so many expressions that you can’t help but fall in love. Remember Wall-E! A huge cast with a lot of action, drama, fantasy and a touch of comedic dialogue help this film to once again become a force at the box office. Not being a huge Star Wars fan myself I must say this film has recruited me in to its fan club and now the force is with me.

More in this category: « Sisters The Hateful Eight »
back to top

We have 447 guests and no members online