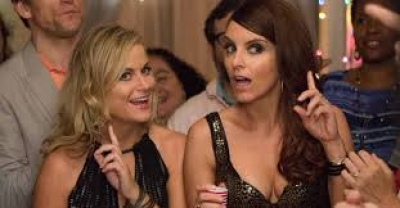 Maura Ellis (Amy Poehler) is little miss do no bad if you know what I mean, always there to lend a hand and basically lives for everyone but herself. She lives in Atlanta, Georgia, somewhat recently divorced and works as a nurse in a local hospital. On Skype one day Maura receives a message from her mom Deana (Dianne Wiest) and her father Bucky (James Brolin) that they are selling the family home in Orlando and moving into a condo community for older folks. They asked her to please inform Kate (Tina Fey) of the news all of which Maura is none too happy about doing.

Kate is a single mother to one daughter Haley (Madison Davenport). Kate loves her daughter but can’t just seem to hold a job in the salon business for very long and for that fact recently a roof over their heads. When she speaks with Maura about coming to Florida, unknown about the house being for sale, Kate thinks up a plan to move Haley and herself to Orlando to move in with her parents for a while. Yes Kate has never been the responsible one of the two sisters, more so a bit of a wild card.

When Kate and Maura arrive at the house they stumble upon a big surprise the house has been sold and they have a small window of time to clean out their bedrooms before the new owners move in. The women acting more like girls decide to have one last fling in their childhood home and after a visit to Facebook invite some old friends to the Ellis Island Revamped party. On the night of the party things are moving a bit slow considering the attendees are not kids any more, even Hae-Won (Greta Lee) and her group of salon girls couldn’t liven things up. One good thing Maura thinks she will finally break in her childhood bed when the sexy neighbor James (Ike Barinholtz) shows up. Let’s just say in this case life is like a music box that turns and turns seeming to never end. Oh the pain! Maybe a gerbil would have been better!

Once Pazuzu (John Cena) shows up invited by Dave (John Leguizamo) with a suitcase full of every drug known to man the party gets rolling, literally and Brinda (Maya Rudolph) the bad witch crashes the party. Alex (Bobby Moynihan) gets funny actually a bit too funny when after a few drugs and alcohol happens to have an infatuation with his penis. The lesbians bring the right tunes and the old suddenly become young at least for that one night.   Nothing is sacred especially the house and the chances of a closed sale become slim to none since what was once a home with feeling has now become just a house, a building that most likely no one will want.

It’s not until Kate learns of what her parents planned to do after the house sold did her life take a turn and so did the party. Haley shows up after missing for the summer, the truth of her whereabouts becomes public knowledge, the pool becomes a grave and mom and dad stop by to witness the death of their sale. A few weeks’ later kids grow up, responsibility is taken, partnerships are made for the better, love is found and in four months later it truly feels like Christmas for the Ellis girls. Remember to stay for the bloopers.

It’s definitely a fun film laced with a lot of bad language, sexual innuendos, drugs and alcohol. Perfect for the young generation or for that fact the older ones wishing they could still party like the crowd at the Ellis party. The direction goes wild during the party making many of the moments worthy of a laugh out loud which is exactly what my friends were doing that attended this screening with me. I know the writers wrote much of this film for Fey and Poehler so obviously there are a lot of funny scenes that border on rude and obnoxious but of course that’s why you would go to this film anyway. Some great music to keep the party going is definitely worthy of looking at the soundtrack but overall this story moves not only because of the music but the cast as well.

Poehler and Fey are perfect together just about as much when they host award shows together. Rudolph is downright hysterical and holds back on nothing. Barinholtz is the perfect good looking boy next door yet in his case man next door. I’m always a fan of Wiest and Brolin and in this case still am since they play well together. Cena and Leguizamo do not have huge roles but they play well together. Davenport and several other supporting cast members help to move this party to the next level but it is truly Moynihan that brings hysteria to hysterical in the Ellis home. A fun time to be had by all and a party I would love to attend but never host.

More in this category: « In the Heart of the Sea Star Wars: The Force Awakens »
back to top

We have 118 guests and no members online