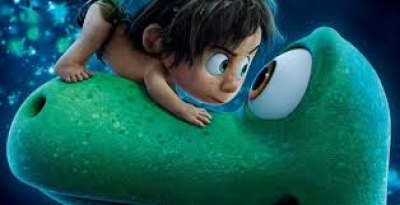 Before the movie we were treated to “Sanjays Super Team” which was a short animation film about a boy, his father, their culture and the child’s fantasy with super heroes.

Sixty five million years ago when the dinosaurs roamed the earth a meteor was headed straight for our planet making all Dinosaurs extinct. Well in this story it missed and a few million years later Dinosaurs still inhabited the earth and some became farmers. Enter Poppa (voice of Jeffrey Wright), Momma (voice of Frances McDormand), their newborn children Buck (voice of Ryan Teeple) a bit of a trouble maker, Libby (voice of Maleah Nipay-Padilla) the smart one and Arlo (voice of Jack McGraw) the shy, fearful, runt of all three children.

As they grow older and help their parents maintain the family farm and the corn they grow all three children, now older, Buck (voice of Marcus Scribner), Libby, and Arlo (voice of Raymond Ochoa) have daily chores to do. Libby and Buck have made their mark and left their imprint with their parents on the stones that store the corn supply but Arlo is still to awkward, shy and fearful to prove himself to be as dependable as his siblings. Sometimes one must see past their fears in order to see the beauty on the other side. As for Arlo it may be a long time before he can appreciate the beauty in life. When his Poppa tells him that a critter is eating their corn supply he leaves Arlo the task to kill the critter and earn his mark. Quite the opposite happens when Arlo meets Spot (voice of Jack Bright) for the first time until later when his world comes tumbling down. Poppa is lost in a flood and soon thereafter Arlo is lost miles away from home with only one option, find his way home.

The critter named Spot, a young cave boy who acts like a dog ends up trying to help Arlo on his journey, even bringing him food, yet not always the right diet. A friendship becomes forged and the journey soon begins for these two characters. They encounter many obstacles along the way some good and some bad but either way they stick up for one another. A storm provides but not always for the best of reasons and several species of dinosaurs make life a bit more trying then expected although some others are as bright as a fire fly on a dark night. Bottom line Arlo needs to get home to his family and will stop at nothing to get there. With the help of Spot Arlo finally finds his inner strength which in the end helps him make his mark in life.

I loved this film and as usual found the animation to be perfection at its best. Would you expect anything less from Pixar? I think not! I especially loved Arlo and Spot and the relationship they build from start to finish. Great direction along with some superb writing help this film to shine but it is the beauty of the animation and the development of the characters that make this story a must see for both young and old. A great cast of characters with a wonderful array of actors and their voice work along with a phenomenal score help make this story what it is. I absolutely loved it and I believe you will too.