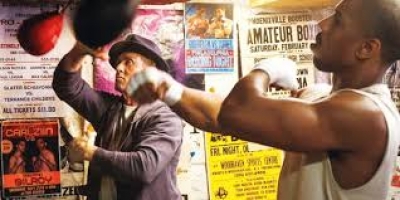 A young boy lost his father before he was born and his mother passed away later in his life as well so he ended up in several foster homes and a juvenile detention center that is until Mary Anne Creed (Phylicia Rashad) literally saved his life. This young boy grew up to be a fighter and not only in his soul but with his hands as well. He never knew why he liked to fight but Mary Anne told him who is real father was, Apollo Creed. Years later in 2015 Adonis Johnson (Michael B. Jordan) who kept his mother’s last name grew up to fight in Tijuana, Mexico with 16 fights under his belt. He was good but untrained and a bit green for the professional fights. So he later left his job in Los Angeles, his beautiful huge home living with his father’s wife who raised him and moved to Philadelphia to find an old family friend, that friend was Rocky Balboa (Sylvester Stallone).

Rocky owns a restaurant named after his late wife Adrian. Well known and content being away from the boxing world he just lives his life alone yet comfortable. When Adonis known as Donny moves in to his apartment the nights become a bit noisy thanks to his neighbor Bianca (Tessa Thompson) who lives below him playing loud music. Bianca is a striving singer and composer who is suffering from progressive hearing loss. Donny begins to work out at Mighty Mick’s Gym and eventually confronts Rocky about being his trainer. First answer of course is no but later when it settles in that he is Creed’s blood Rocky accepts the challenge as does Bianca who later becomes his girlfriend.

Donny never had an easy life and Rocky will not play favors to him as a trainer. He actually recommends Donny keep Johnson rather than Creed as his last name so he can make a name for himself and not off his heritage. Rocky and Donny leave Mick’s Gym for a more private and secluded First Street Gym where the real workout begins. It also helps of course that Donny now lives with Uncle Rocky and work outs begin promptly at 5:45 am. Soon the secret comes out, of course with Rocky as your trainer there has to be some reason why and Pete Sporino (Ritchie Coster) from Mick’s Gym finds out exactly the reason. Everything for Donny was going great, living with Rocky, his girlfriend Bianca, and knowing Mary Anne loves him yet worries for him but with a name like Creed the light heavy weight champ “Pretty” Ricky Conlan (Tony Bellew) and his manager/trainer Tommy Holiday (Graham McTavish) want to fight him. The big question though is if Adonis Creed is ready. Well ready or not he’s in for the fight as is Rocky who by the way finds out he has even a bigger fight ahead as well. One night in Liverpool, England televised on HBO Sports the fight of the year takes place, Creed versus Conlan and both men have one major personal reason to win. Donny comes out like a man possessed as Conlan comes out with a record of 36-0 which includes 28 knock outs. Let’s get ready to rumble and that they do in numerous great rounds of boxing, a fight to the finish.

I loved this film, the direction, the writing, the cast. It brought back the days of “Rocky” even though he could no longer be the fighter in the ring he was still the fighter beyond it. Jordan was phenomenal and in my opinion this was absolutely his best film to date. Stallone is and will always be Rocky and he once again proves that he was made to play this role; he was beyond excellent tackling a vast majority of emotion from start to finish. Thompson was good playing the part of Creed’s girlfriend but I thought she needed a bit more emotions to develop her character. Nice to see Rashad and even though her role is small she once again like always does it with professionalism and believability. Bellew is one tough dude and handles his lines with precision. There are many known actual boxers in the story along with some other supporting actors that truly make this film worth seeing at least for the male demographic. Rocky even though he is older and wiser he can still climb those famous stairs in Philadelphia and hopefully fill packed theaters across the world.

More in this category: « The Hunger Games: Mockingjay Part 2 The Good Dinosaur »
back to top