My All American Featured 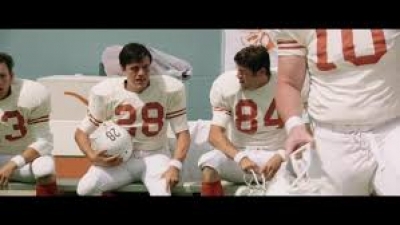 In the year 1960 in Colorado a young boy named Freddie Steinmark (Alex Brewster) aspires under the guidance of his father Fred (Michael Reilly Burke) to one day be a big football player for Notre Dame. Years later in 1966 Freddie (Finn Wittrock) is playing for Wheat Ridge High School football. Not quite as big as the rest of the guys like his new pal Bobby Mitchell (Rett Terrell) a new student transferred from California but he had spirit and a lot of it. He practiced hard every day with his father and proved himself to be quite the defensive player on the field and off. His junior year he met Linda Wheeler (Sarah Bolger) and they became an instant couple and high school sweet hearts.

When it became time to search for colleges Freddie was not considered once they discovered his size, totally disregarding he was a 4.0 student. Yet one coach, Darrell Royal (Aaron Eckhart) from the University of Texas out of Austin decided to meet with Freddie and his teammate Bobby and soon thereafter both young men were accepted to play for the Longhorns under full scholarships. In the Fall of 1967 the boy’s lives have changed and in 1968 coach Royal had to cut his team from 200 players down to 100. Both Freddie and Bobby proved their worth even though life was throwing obstacles their way yet as a sophomore Freddie started as a safety as one of the most valuable players on the team. Life for Freddie was unstoppable; he had his faith, good grades and the respect of his University as one of the all-time best players to walk the football field. If a man could walk on the moon Freddie knew he could have an excellent life on and off the field.

His mother Gloria (Robin Tunney) was always there for him as was his father and his girlfriend Linda, life for Freddie was perfect. Texas became #1 in its league and Freddie was the heart of their defense. In the biggest game of all times for Texas versus Arkansas Freddie’s leg injury became worse causing him to play at 90% instead of 100. The game went down in history and Texas became the 1969 national champs leading the way for them to play Freddie’s all-time team Notre Dame in the Cotton Bowl. One problem, Freddie was always a positive person and fought his way in life over every hurdle that came his way but this final hurdle became too tall for him to jump even with the help of his friends and family. Freddie made it to the Cotton Bowl but not in the way he had hoped yet even though he struggled with his final hurdle he was admired and appreciated by everyone who ever met him.

Even though films like these don’t make a lot of money at the box office it is a shame since they should. This film was inspirational, well directed and nicely written with the right amount of character development to get the audience emotionally attached to its leading man, Wittrock, who by the way is phenomenal. I cheered for the games during the film and like many others in the theater cried tears at the very end. Films like these are the ones that need the attention of the mass population but unfortunately we live in a different world than what once was. What can we do to bring it back? Well a start may be to support films like this one that make a difference in people’s lives.

Wittrock was inspirational and a joy to follow in this story. Bolger was a nice balance to his personality and played well as his love interest even though she comes in and out of many of his scenes like his parents Tunney and Burke do. Yet they truly help to establish the character that Wittrock portrays. Eckhart as an older gentleman is questionable but as the coach in the 1960’s he was spot on. All of his teammates in the game James Street (Juston Street) to his roommate Bobby (Terrell) they were the dream team that truly kept life in this story from beginning to end and made this story about Freddie Steinmark truly worth seeing on the big screen.

More in this category: « The 33 Love the Coopers »
back to top