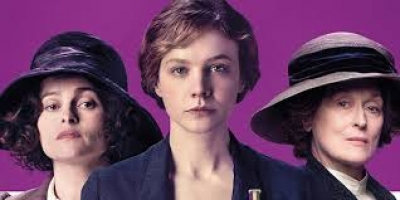 Based on actual events this film follows brave women who fought for equality 100 years ago. London 1912 women were only represented by men. They had no right to vote, no equal pay, no right to better jobs, no right to their own children in addition to many other atrocities they had to bare in order to survive in a strict man’s world. Emmeline Pankhurst (Meryl Streep) was one woman known by all for her fight for women’s rights who was admired by women but sought after by authorities as a criminal out to create violent protests.

Most of the women of lesser means like Violet Miller (Anne-Marie Duff), her daughter Maggie (Grace Stotter) and Maud Withers (Carey Mulligan) amongst many others worked in the laundry factory making less money than the men and longer more grueling hours under the rule of the heavy and sometimes perverted hands of their male boss. A small group of women in town led by middle class Edith Ellyn (Helena Bonham Carter) were gathering together to create stronger protests since words alone were not working. Maud lived a quiet life with her husband Sonny (Ben Whishaw) and their son George (Adam Michael Dodd). In time though as Maud got approached by the small group of women to join their fight Maud herself could not just stand by any longer and watch the horrors that surrounded her so she joined the group.

They gathered in secret as much as they could but authorities led by Inspector Arthur Steed (Brendan Gleeson) had a watchful eye on their activities. During some protests women were beaten and put in jail treated less than a wild caged animal. Maud happened to be one of those women that went to jail and when she was released her private life began to change as well as her family life. If government wanted women to respect the law then they should make the law respectable for everyone not just men. These women fought for their rights and in the meantime lost so much of their dignity only for trying to be law makers not breakers. Maud got more involved so much so that some of the women began to plant explosives to make a point. Arrested again and later released Maud had nowhere to go since her husband threw her out and ban her from her son. These actions did not stop but only intensified causing Maud to take even more action against the law that gave her no right for votes.   It was the actions of Emily Wilding Davison (Natalie Press) that made the world not just England take notice of the way women were treated and with more support and more protests finally the laws began to change.

This story was amazing and very important for all to see just how the woman’s movement took place back in the early 1900’s. It is truly a sad world when people treat other people with little respect for each other whether black, white, man, woman, straight or gay every person deserves to be treated equal. Perfect direction and writing that kept me focused on this story from start to finish. Photography, costumes, score and just overall casting was ideal. The theater was filled mainly with women and hopefully moving forward women and men, young and old go out to watch this highly intellectual and important story to be seen. Although it may only find a smaller demo audience out to see this movie take it from me it is well worth the knowledge everyone will accept from this important movement for equality. The entire cast is stupendous with Gleeson, Carter, Whishaw and Duff taking control of their scenes along with the final act of the character Press plays during the last several minutes of the film. For a young lad Dodd does a nice job during several heart to heart moments with his on screen mother played by Mulligan. It is Mulligan though that leads us through history in a stellar performance about her character Maud Watts. Her name surely may come up during Oscar time.

More in this category: « The Peanuts Movie Trumbo »
back to top