Our Brand Is Crisis Featured 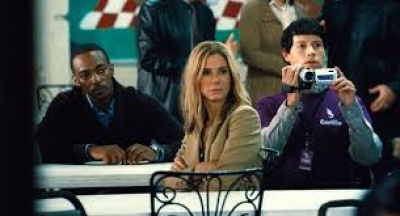 Our Brand Is Crisis

Jane (Sandra Bullock) has not been a strategist on a new campaign in over six years that is until she is sought after to represent Castillo (Joaquim de Almeida) for President in Bolivia, South America. Castillo is not even close to the favorite candidate in the election actually straggling twenty eight points behind Rivera (Louis Arcella), the favorite in first place. When Jane arrives in Bolivia her first impression to the team is not too good since she encountered altitude sickness which brought on a round of vomiting. It took her a while to settle in but when she did she took the road running with the help of Ben (Anthony Mackie), Nell (Ann Dowd), Buckley (Scoot McNairy), volunteer Eddie (Reynaldo Pacheco) and Jane’s close right hand woman LeBlanc (Zoe Kazan). As she settles into her role she discovers that Rivera’s strategist happens to be a longtime rival Pat Candy (Billy Bob Thornton). Let’s the war games begin! This is not only business now it’s personal.

Jane discovers that you can’t change the narrative to fit the man especially in Castillo’s case but you can change the man to fit the narrative. At least she hopes she can! Once the team and Castillo began to trust her and her ideas the ratings began to climb exposing not only her candidate but also Jane’s background as well. Bus wars to booty flashes the world of politics can get ugly and childish but when a strategist tells you to cry you cry and to instill fear than you make people fearful. Noting is held back when it comes to an election and when a record turnout appears someone wins and someone loses but you hope you’re the one with at least a one point lead or more in the end.

Yet underneath the cloak and dagger political world many make promises they can’t keep or maybe never intended to do so in the first place. The people vote for what they want but sometimes they get more than they bargained for. If voting changes anything they would make it illegal to do so. Amongst riots and protests sometimes you realize you need to do the right thing and if you don’t like the road you’re on then start paving another one.

I really loved and appreciated this film for exposing some aspects in the world of campaigning. Great direction with superb writing along with an election year right around the corner makes this film worth seeing on the big screen. Accompanied by a nice score, photography and a perfect subject matter this cast of characters brings a brilliant performance to the story. Definitely some animal use in this film with the appearance of a female Pitbull and some not so flattering final results for a certain llama on the set of a political commercial. It also looks like the movie industry is trying very hard to help out the tobacco industry in this movie as well with it looking like a cigarette campaign at times.

It is Bullock that once again gives a stellar performance making people laugh and question their own thoughts about politics and life as soon as she enters the story. Once again she can possibly see an Oscar consideration. Thornton does a nice job but he plays it off a bit stiff and unemotional as her rival for many years. Mackie, de Almeida, Dowd, McNairy, Kazan and Pacheco all give the film some awesome support but it is truly Bullock that controls every ounce of this story. With November 2016 right around the corner this is definitely an enlightening and funny film to give you some insight or at least thoughts about politics overall.

More in this category: « Room Spectre »
back to top

We have 603 guests and no members online