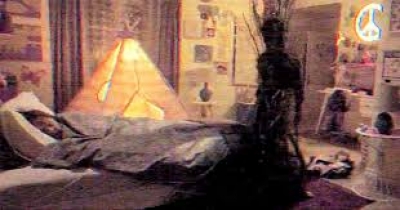 November 29, 2013, Ryan (Chris J. Murray), his wife Emily (Brit Shaw) and their daughter Leila (Ivy George) are living in their new beautiful home in Santa Rosa, California. Uncle Mike (Dan Gill) and a family friend Skyler (Olivia Taylor Dudley) have stopped by for the holiday and have taken part in some of the festivities. While Ryan and Mike are unpacking holiday directions they find a box with VHS tapes and a big old recording camera. That evening when Ryan uses it to film the family around the living room and the Christmas tree some odd dark images appear only being visible through the camera lens. On the VHS tapes of families from years ago but on one particular tape is Katie (Chloe Csengery) and Kristi (Jessica Tyler Brown) filmed in 1988 but somehow they are able to see and mention in detail current events and situations happening now in the house they were raised in and mysteriously disappeared from many years ago.

December 12, 2013, strange things start to happen within the house and Leila has made a friend named Tobi (Mark Steger). As the nights continue Leila becomes even more estranged from her family doing things that don’t make sense to anyone other than Tobi. On night four when Leila tells her parents Tobi is going to take her away Emily and Ryan call in a priest for help, Father Todd (Michael Krawic) in hopes of terminating the demon from the house and family. On night seven a tunnel appears and Tobi has taken control of everything and once and for all found what he sought all along, life from death.

It’s about time they retire the camera and put Paranormal to sleep once and for all. The direction is not bad considering the camera use which gets a bit obnoxious as always and the 3D is really not worth it but I did like that they brought the past into the present yet for the people that haven’t seen all the other Paranormal films it will mean nothing to you. In that case I’d say the writing leaves out a part of this films audience from the history of Tobi and the past. They do spell it out a bit in the usage of the VHS tapes but if you blink you may miss it. They try to scare you with some fast ghostly images but overall it worked once for me but not thereafter although I give them credit for a better use of special effects in this film versus the past ones.

Thankfully there are some better effects since for the most part the acting was not very good. Murray was a bit weak and off camera mostly. Gill was stiff and just plain horrid. Dudley had promise but wasn’t utilized enough to prove her worth. George has potential and does ok with playing the daughter being demonized by Tobi. The one glimmer of hope is Shaw who I think does pretty well especially compared to her co-stars. Oh yes and Krawic should stay in church and pray for more acting lessons. Being a horror fan even for the bad ones I think for the most part this film may work for some people but overall shoot for some better options this Halloween season with 1.5 paws out of 4, I’m Jon Patch.

More in this category: « The Last Witch Hunter Steve Jobs »
back to top