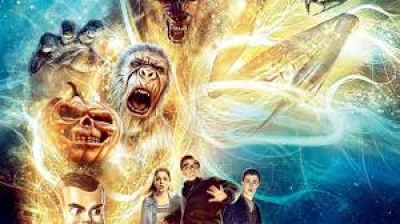 I went to see this movie with my mom this past week. I have seen some of the series on Netflix and read a few of the books so I was excited to see it.

The movie begins with a boy named Zach and his mother moving to a small town in Delaware. His mom has been hired as the new Assistant Principal of the town’s high school. Moving from New York was going to be an adjustment for sure. As they are moving in Zach meets the neighbor girl who lives next door. She seems really nice until he meets her father (Jack Black) who warns him, not so nicely, to stay away from his daughter and their house. Hannah, the girl next door, goes against her father’s wishes and makes friends with Zach showing him around the town and taking him to a cool, deserted amusement park in the woods. Zach learns that Hannah is home schooled by her father and isn’t allowed to do much. When he hears screaming coming from her house and sees her father acting very strange he decides to call 911. When the police arrive her father manages to get them to leave without seeing Hannah. Zach feels she is in danger and fake calls her father so he will leave the house. Zach and his new friend Champ go over to Hannah’s house and try to get inside to find her. The basement is spooky and filled with bear traps and cobwebs. When they get inside they find a dark study with bookshelves filled with R.L Stine book titles that are all locked. One thing leads to another and Zach finds the key and opens one of the books. A monster is unleashed from the story. Other books are also falling off the shelves and before you know it, many more book characters are let loose. Hannah comes and tells them that they must get the monsters back in to the books or bad things will happen. Zach and Champ join Hannah and eventually are helped by her father. It comes out that her father is actually R.L Stine, the author of all the Goosebumps books! One monster is put back into his book but soon many others are released and the craziness begins. You will have to go see this movie to find out if the town is destroyed or if Zach, Champ and Hannah are successful at returning the monsters back to their holding places.

More in this category: « Crimson Peak The Last Witch Hunter »
back to top