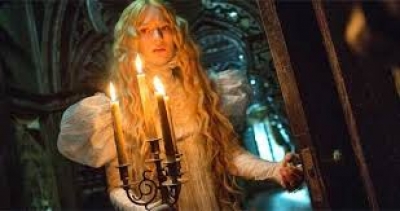 Do you believe in ghosts? Well, ghosts are real!

A young girl named Edith Cushing has lost her mother to cholera and watches as her friends and family bury her in the ground. Sometime later her mother (Doug Jones) came back to visit her with a message. Fourteen years later in Buffalo New York, Edith (Mia Wasikowska) is all grown up, living with her protective father Carter (Jim Beaver) as she strives to become a successful writer in a man’s world. Criticized by many for her goals, her anti-social behavior and lack of a man in her life other than a childhood friend Dr. Alan McMichael (Charlie Hunnam) Edith one day meets a stranger in her father’s office, Thomas Sharpe (Tom Hiddleston). Thomas is there for a meeting to ask Mr. Cushing and his associates for an investment in his clay mine digger machine. A good businessman does his homework and Mr. Cushing is a great businessman and soon rejects Thomas’s idea.

One night when Dr. Alan comes to meet Mr. Cushing at his home to attend a party together it is Edith that decides to stay at home alone. It turns out she is not alone yet when Thomas comes knocking at her door he convinces her to attend the party with him upon where Edith later meets his sister Lucille (Jessica Chastain). A budding romance begins between Edith and Thomas but when a complication gets in the way and Edith’s father dies, life absolutely takes a turn in the Cushing residence. Edith marries Thomas and moves to his home Allerdale Hall in Cumberland England to live with him and his sister as well as a lost small little dog of which Edith takes in. Funny how this lost dog knows its way around a mansion and even comes with its own small red ball! The mansion is an elaborate mess, no ceiling in the entry room, red clay in the water pipes, weird noises when the wind blows and not to mention the home is sinking into the ground but for some odd reason the three members of the Sharpe family remain in the house along with a few dark secrets that come out to walk the hallways from time to time.

Money, broken dreams and no living relatives Edith tries to live her life in the Allerdale Hall home but she soon begins to realize that not all things are as they seem and the ones that scare the most are maybe the ones that hold the truth to the Sharpe siblings. Yet love is blind and surely it is for Edith when she looks at Thomas but through it all and in the end what happens next is all for love both good and evil, past, present and possible future.

The film never loses my attention especially for the cinematic view of it. The direction is well done but the writing I found to be predictable and a little loose ended, not tying up all the noises that go bump in the night. The score is wonderful, the costumes brilliant and the photography breath-taking but overall in the end it is the cast that is superb from beginning to end. Wasikowska is perfect t as the good girl who eventually finds her bad girl inside her. Chastain who I am already a huge fan of does not disappoint here taking evil to another level and her runs throughout the mansion staircase are freakish in themselves. Hiddleston is a great leading man with a soft loving heart that is taken over by his evil sister and Hunnam is the good guy that everyone wants to have in their life but doesn’t appreciate when they do. Beaver is a great balance to the story and a wonderful father-figure during the amount of time spent on screen. A wonderful supporting cast and a few extras along with a good message about a dog’s life in the beginning but maybe not so much in the end all make this film worth watching on the big screen. I enjoyed the story although I personally would have appreciated a bit more ghostly moments other than horrific acts but overall my friend April jumped and gasped many times and I have to admit one or two scenes really made me gasp a little bit as well. A nice period piece from the late 1800‘s this story is sure to keep you interested from start to finish. Written with 3 paws out of 4 by Jon Patch. Oh and by the way yes ghosts are real I know that for a fact.

More in this category: « The Martian Goosebumps »
back to top

We have 635 guests and no members online