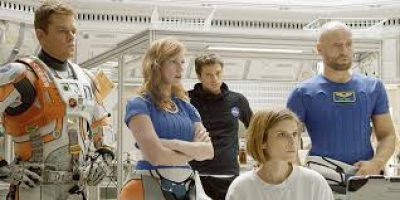 Six astronauts, Mark Watney (Matt Damon), Melissa Lewis (Jessica Chastain), Rick Martinez (Michael Pena), Beth Johanssen (Kate Mara), Chris Beck (Sebastian Stan) and Alex Vogel (Aksel Hennie) are all on a mission to mars but when a fierce storm hits the red planet they have no option other than to flee but when the attempt is made one man is left behind thought for dead. Quite the contrary, on SOL 18 Mark Watney was injured and buried in red sand but he did not die. Not yet at least!

The crew was off into space and neither they nor NASA had any communication with the Red Planet so as far as they all knew and for that matter the world that Mark was gone forever. Back on Mars Mark was alone and faced with the fact that he would run out of food, water and oxygen before the next Ares manned mission to Mars would show. A matter of fact he had one year supply but would be stranded for four years and who knew what that planet had waiting for him in the future. Where there’s a will there’s a way and Mark being a Botanist found a way to grow food and make water. Grant it his first attempt was quite explosive but he is a smart man.

Back on earth Teddy Sanders (Jeff Daniels) the Director of Nasa along with Annie Montrose (Kristen Wiig) and Vincent Kapoor (Chiwetel Ejiofor) along with the world was mourning Mark’s death. That is until days later when Mark was able to communicate with NASA telling them that he was still alive. Next step was to pull the many great minds, Rich Purnell (Donald Glover), Mitch Henderson (Sean Bean) and so many others to find a way to bring Mark home from fifty million miles away. It wasn’t until months later that the remaining five member crew on the Hermes headed for home found out the truth about Mark. NASA did everything they could to find a way but it took another country, China, to get involved to help out the efforts. Ironman Mark was always the first at everything on Mars and on SOL 561 the decisions made by him, NASA and the Hermes crew would mean life or death for the original six as the entire world watched and the future for Astronaut candidates in years to follow would be in question.

I did not want to say too much in the synopsis above but it was absolutely amazing what Ridley Scott, who I love for many of his other films like Alien, did with this film. The direction, superb, the writing and the cast of voices involved, smart and brilliant, the score, perfect and the cinematography outstanding. The film starts out strong and gets a little lengthy in the middle as Mark is trying to figure out how to survive but the ending makes it all worth it.

Most people would have given up trying to survive at all be it left alone millions of miles away on some alien planet. Damon’s character did quite the opposite, like Tom Hanks in “Castaway” he found a way and his journey is fascinating to watch both on Mars and that of his colleagues on Earth and in the Hermes station. Damon is sure to get a nod come Oscar time. I am a fan of his as well as Chastain and even though the film evolves around Damon’s character Chastain is wonderful as always as are the other co-stars Pena, Mara, Stan, Hennie, Ejiofer, Daniels, Davis, Glover and so many of the cast members. Wiig doesn’t have a huge part but they at times try to add an ounce of humor through her character which in a small dose does work but thankfully they did not go overboard with it. Overall a great cast with hours of stunning photography all lead up to 3.5 paws out of 4 by Jon Patch.

More in this category: « Sicario Crimson Peak »
back to top

We have 367 guests and no members online