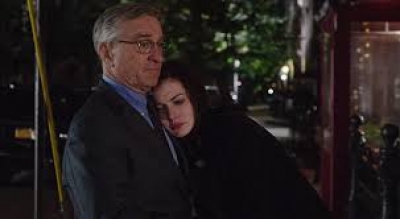 Ben (Robert De Niro) is a retired 70 year old widower that is tired of spending his time at the movies, golf, reading books, taking care of plants and spending a lot of time at friend’s funerals. He wants more in life and it’s not Patty (Linda Lavin) who he had a fling with one night. Visits to San Diego to see his only son and his family is not quite cutting it either. It’s not until he finds a flyer stating that a company called ‘About the Fit’ which is run by a new entrepreneur in the fashion internet business Jules Ostin (Anne Hathaway) does his life take a new direction.

Up against a number of other possible senior interns, a new concept but a good one, he eventually lands the job after a number of interviews. Jules is not keen on the idea of a senior working for her and figures that after six weeks she can terminate him. Four interns start on the same day as Ben, one being David (Zack Pearlman) a quirky but entertaining young man who happens to become good friends with Ben in a company that is eighteen months old and now has 220 employees. Jules met her five year goal in just nine months with the assistance of Cameron (Andrew Rannells) but since they are growing quickly he recommends she hire a CEO to run the company in order to lighten her load giving her more time to spend with her stay at home husband Matt (Anders Holm) and their Jules clone little daughter Paige (JoJo Kushner),

Afraid to give up the reigns to a stranger that could possibly alter her life and that of the company Jules begins to forge a friendship with Ben especially as his mature advice is the best she has received from anyone, not Cameron, nor Jason (Adam DeVine), Becky (Christina Scherer) or Justin (Nat Wolff). Some good advice for Jules from Ben, you’re never wrong to do the right thing, words to live by, problem is many people in today’s world don’t understand them. Jules is faced with many decisions much more than she already had, some being business and some personal but thankfully she has Ben to lean on, literally. As Ben becomes more of an asset at work, Fiona (Rene Russo) the company masseuse starts to become an asset at home.

In life everyone deserves to be happy, even Jules, but happiness is never to be found if someone you care about is lying to you. Jules working environment is like a family and when she and Ben take a business trip together to San Francisco much of the hidden pains within them both come to surface and after 42 years of marriage and a strong work ethic Ben is someone to be listened too. Have you ever been scared of death and being buried alone? Have you ever found out the person you truly love in life is a liar and a cheat? If you found out they were and the reason may make an ounce of sense could you forgive them? Sometimes you need time to sleep on these questions before answering them yet sometimes absolute honesty is the truth that will set you free and make things better yet for some maybe not! Overall though if you have been honest and faithful in all you do it is not your fault if the other person strays it is truly a depiction of who they are and their morals not yours. Never think you’re at fault when someone in your life hurts you and strays because there is never a good reason for it. It is your choice to forgive but hopefully the other person makes the choice to be completely honest and I mean completely. In the end a person deserves at least that much respect but through it all just remember to breath!

I absolutely loved everything about this film, the direction, the writing, the humor that will have you laughing out loud and the life lessons you will discover and hopefully take with you when you work at a job, have a family and hope to succeed at both. The growth that the characters develop amongst each other and the everyday issues that face a woman trying to juggle a career and home, an older gentleman trying to reflect on others that he is just as if not more capable of holding his own in the work place no matter at what age are very valuable lessons. Albeit in my 50’s I can relate to many topics in this film and I know people at 20 years and up will love this movie as well.

De Niro is just fantastic as always and works great alongside the entire cast including Hathaway that once again hits a home run with this comedy and I think drama as well. Russo was a nice support and Lavin was absolutely hysterical especially at the funeral scene. Holm was a bit off as the stay at home dad being in my opinion the weakest link but Kushner was great and will surely be seen in more films to come. Rannells is just kind of there and not a main focus but DeVine, Pearlman and Scherer are all perfect elements to the story that make it work so well. As for the rest of the cast they all contribute to a wonderful body of work. Enjoyed and written with 3 out of 4 paws by Jon Patch.

More in this category: « Black Mass Hotel Transylvania 2 »
back to top