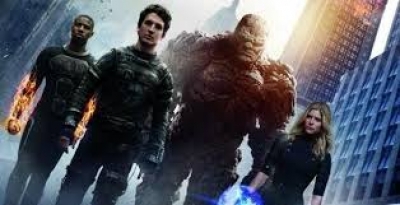 Oyster Bay, New York in 2007, its career day at school and a young Reed Richards (Owen Judge) is in front of the class telling them about his transportation machine he is building in his garage. His teacher tells him to sit down and come back into reality but his one classmate Ben Grimm (Evan Hannemann) whose family owns Grimm Garage is intrigued. Later that night the two boys meet and try to transport through time a small model car. It disappears without any way of returning but from that point on the boys become best friends, never giving up on their idea.

Seven years later, at the school science fair the same teacher dispels Reed (Miles Teller) and Ben’s (Jamie Bell) invention but Dr. Franklin Storm (Reg E. Cathey) and his adopted daughter Sue (Kate Mara) do quite the opposite. A full scholarship later and Reed is off to New York City to attend classes at the Baxter Foundation. This is where Reed meets Johnny Storm (Michael B. Jordan) the rebel and Victor Von Doom (Toby Kebbell) the manipulative and uncalculated one. Before you know it Reed, Sue, Victor and Johnny are building the transporter to send a test chimp into another dimension and back. When it works and the Baxter Company wants to contact NASA to take over the project, Reed, Johnny and Victor decide to go first inviting Ben, Reed’s best friend to come along since he helped on the project for years. With Sue back in the lab helping them return four went yet only three returned in an explosive re-entry from a planet somewhere else that caused them all including Sue to obtain special powers that they all will need to soon understand and control. Reed being able to stretch his body like Gumby, Sue being able to disappear and create a force field able to also help her fly, Johnny the man of fire and flight and Ben has become a thing made of stone and super strength.

After working with the government to protect the nation one year later Franklin is trying to run new tests to cure them but Reed had disappeared and they need his help. Once found the foundation sends several men back to the other dimension yet what they find is unexpected and unknown to them. Dr. Doom wreaks havoc on the foundation and earth later returning to the alien planet to cause an end to earth once and for all. Before he can do this the F4 ban together, finally, to fight to save mankind before it’s too late.

The film missed the mark in many ways. Character development is weak, the story gets repetitive and a bit flat in the middle, the chemistry is not shown grant it this is the beginning relationships for the F4 and the battle scenes are minimal and a bit disappointing and some characters seem to just disappear from the story line. I did enjoy learning the history of F4 but learning about it for the whole film is a bit over-kill for the audience. The writers finally involved civilians in the story and that lasted about 2 minutes. They needed to get out of the lab and into the world other than all that the film is at least interesting but does not come close to the previous F4 films. Too bad I was hopeful! The interesting part is that if there is an F4 2 then the writers should have a lot to work from to make it better than this opening introduction.

Surprisingly Teller does an ok job as Reed although a little too baseline, lacking somewhat of a personality. The writers totally left out some levity in this film heck I thought Jordan would have brought it but nope he was almost a bit depressing and immature. Mara is probably the breath of fresh air as is Kebbell but he wimps out in the end a bit too much for a bad guy. Bell is good but the writers really just kind of threw him into the mix which was a bit odd. I liked Cathey especially his voice and the young Judge and Hannemann do a fine job with their roles. Overall, if the writers and director took the F4 out of class and into the real world for at least a fifth of the film it surely would have made a difference. Live and learn I guess with 2 paws out of 4 I’m Jon Patch.

More in this category: « Ricki and the Flash Straight Outta Compton »
back to top